London Olympian has finished second Irishwoman in past two years 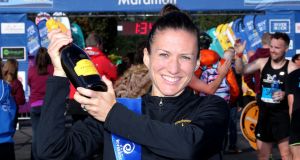 Caitriona Jennings celebrates winning the Belfast marathon in 2017. “I’ve always felt I had something to prove after London. After the way it went on the day, I just wanted to prove that wasn’t the athlete I was.” Photograph: Jonathan Porter/Inpho

There is nothing more sad or glorious than de Coubertin’s old Olympic creed. Few athletes are there just to take part, and whatever about the winning, the essential thing is usually the triumph and not the struggle. Until realising what actually is the most important thing in life.

It’s just over six years now since Caitriona Jennings ran the Olympic marathon in London 2012, effectively one long and painful struggle, even if ending on a sort of personal triumph.

Running with stress fracture in her left foot, Jennings was soon isolated and ended up the last of the 107 women to finish, some 45 minutes outside of her best, teary-eyed and apparently inconsolable.

There were no regrets, because Jennings had no idea how much the stress fracture would actually hurt, but in the still painful aftermath she decided to take a clean break from competitive athletics. But she realised the simple enjoyment of running is one of the most important things in her life and it was essential she found a way of getting it back.

Most competitive athletes will tell you that it’s mostly about finding a healthy balance, which is exactly where Jennings is right now.

Her love of running suitably restored, she’s aiming to win the national marathon title which comes with being the first Irish finisher in Sunday’s Dublin marathon. Second best for the last two years, she is definitely not there just to take part.

“After London I stopped running completelyreally because I had to,” says Jennings.” I ended up having a stress fracture in both legs, but no regrets about it either. I’m very proud that I finished in London and honestly didn’t know how it would go. I always felt I would get through it and knew as well there was a real risk of injuring myself, and I would pay for it for a few months. And I was happy to take that risk.

“But I’ve always felt as well I had something to prove after London. After the way it went on the day, I just wanted to prove that wasn’t the athlete I was, that there’s more there than that. Still a bit of unfinished business I suppose.”

She opted out of the Athletics Ireland programme and not long after that entered the Irish Rowing programme, partly with her recovery in mind, partly with possible qualification for Rio 2016. Her older sister Sinead Jennings (married to two-time Irish rowing Olympian Sam Lynch) was already eyeing Rio in the lightweight double sculls and ended up making the final with Claire Lamb, making it a family double in Olympic representation.

“I started rowing at first because it would fit well with my recovery, and endurance background, and also the additional weight-lifting needing for working would help in increase bone density, so that worked well. After two years I decided it just wasn’t really for me. Rowing is very different to running. With the running for me it’s because I love it, rowing was more of a chore, something with a goal in mind.

“A year or so before Rio it came to the stage where I was running out of time, and wasn’t enjoying it as much as I should have been. I’d given up a lot, moved to Cork to live in the training centre, put my career on hold. In a way it might have been a little too much pressure again. Sinead was very encouraging, and the standard was excellent, but maybe it was a tall order for me to try to make it.”

Watching her sister successfully row in Rio certainly rekindled some her competitive streak, which Jennings admits has always been in the family from the childhood years growing up in Letterkenny. She’s tried other competitive sports too and represented Ireland in triathlon first, before running began to make the most sense.

Jennings ran her first marathon just 10 months before the London Olympics, finishing fifth-best Irish woman in Dublin in 2011, clocking 2:42:11. The following April she knocked almost six minutes off that, running 2:36:17 in Rotterdam, the second fastest of four Irish women to qualify for London.

That selection wasn’t without some controversy as Maria McCambridge missed out, and another Irish marathon representative, Linda Byrne, has also spoken about her difficulties in rediscovering the love of running after her London Olympic experience.

For Jennings the love came back by partly by chance and partly by design. She works as a full-time tax advisor for Goshawk, the global aircraft leasing company based in Dublin, and loving her job has helped restore her love of running.

You tell yourself you’re doing it for fun, but then the competitive thing kicks in agai

“Being head of tax for a global operation, it’s a very interesting industry, and I enjoy working there, love my job, love the fact I have a career. Sometimes the struggle is to excel in both and it’s why running hasn’t been the main focus. It’s great to have to two, but challenging as well. But you are more productive at work and running is always a good way to clear the head after a stressful day, if anything is bothering you.

“Around then I just got back for the love of it. Because I missed it, first of all, and then you start getting better again. You tell yourself you’re doing it for fun, but then the competitive thing kicks in again, unfortunately. Sometimes I wish it wasn’t so. But no, it’s definitely there, and you always want to represent your best, which for me is also why you need to reset expectations, more for yourself than other people.

“But I know from my own household, it was all about high performance, from age 14, 15. That didn’t put us off and I think there is a lot to be said for winning and losing – not just participation, That has to be recognised as a positive thing, it’s just hitting the happy medium. It’s not the be-all and end-all.

“It’s also about changing expectations, mindset, things like that. I’m very busy at work, my career is very important to me, so it’s about finding the balance.”

For the last two years in the Dublin marathon Jennings has finished second-best Irish woman behind Laura Graham, the Down runner and mother of four who has flourished late in her career.

Graham will miss Dublin on Sunday through injury. But Jennings certainly won’t have it all her own way with 2016 Rio Olympian Lizzie Lee from Cork also eying up a first Irish marathon title just under three months after finishing 29th at the European Championships in Berlin, running 2:40:12.

At 38, the same age as Lee, Jennings is still relatively young by women’s marathon running standards (Sinéad Diver, the 41-year-old Mayo native, running a best of 2:25:19 to win the Melbourne marathon earlier this month).

In preparation for Dublin this year, Jennings has been working with Donegal coach Teresa McDaid, also upped the strength and conditioning work under Peter Mathews, and gives the impression that positions on Sunday are more important than times.

“I’ve really enjoyed training for Dublin, approached things a bit differently. In any marathon you need everything to line up on the day, that bit of luck as well. I never really lost that love of running after London, it was just hard to run through the injuries.”

And loving it enough again to perhaps aim for Tokyo 2020?

“I’d be lying if I said it wasn’t. Maybe I’m wrong, but once you’ve competed at that level it’s very hard to let it go. But I won’t get ahead of myself, see how Sunday goes first.”