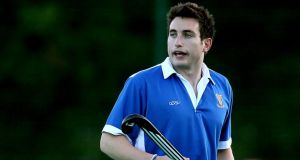 Gary Shaw: got a hat-trick in Glenanne’s 5-2 success over Kilkeel. Photograph: James Crombie/Inpho

The Irish Senior Cup quarter-finals has a distinctly Leinster-dominated hue as six Dublin sides progressed with wins over Ulster sides on Saturday afternoon.

It came with plenty of goals too, Glenanne, Monkstown, Three Rock Rovers, Pembroke, Fingal and Corinthian all netting five or more in emphatic wins.

Fingal’s was the tightest of the results, pegged back to 2-2 early in the second half of their tie against Ulster Premier basement side NICS.

The return of the wily Aidan Sweeney to the first team, though, helped the airport side pull clear as he netted twice while also assisting one for Paddy Gahan.

With Conor Wheeler netting a brace, it helped Fingal win out 5-3 and advance to a rare quarter-final on home turf where they will meet Three Rock Rovers who downed Belfast Harlequins 7-0.

Glenanne had a similarly sticky tie against Kilkeel as they were locked at 2-2 at half-time. Gary Shaw’s pair were cancelled out by William Annett’s couple only for the Glens to fire three without response in the second period, Shaw completing his hat trick and Eddie O’Malley grabbing two in a 5-2 success.

They will face Lisnagarvey in the quarter-finals as the Hillsborough club beat UCD, the one Leinster side to fall at this stage of the competition.

Timmy Cockram and Jonny Quigley had them 2-0 up before the students got one back with seven minutes to go, making for a nervy closing phase but the 23-time winners held on.

Monkstown set up a battle royale with Banbridge in the next round in a repeat of last year’s Irish Hockey League final. The former were ahead inside two minutes against Portadown via Ross Watkins en route to a 6-1 win.

Bann, meanwhile, ran up a 4-1 win over the last remaining Cork side, C of I, in Garryduff.

Corinthian, meanwhile, were comfortable 5-0 winners in north Belfast against Mossley and Pembroke won 7-3 in Tyrone against Cookstown.

Initially, goals from Mark Loughrey, Karl Lynch and Keith Crawford put Pembroke 3-0 up before Cookstown got back in the mix with a goals from Mark Rooney and Greg Allen, making it 3-2 at the break.

But a pair of Maurice Elliott goals, a corner from Conor Harte and another from Tim Hill saw the Dublin 4 side romp to a comfortable result.

They will meet Corinthian in the final four at Whitechurch Park.