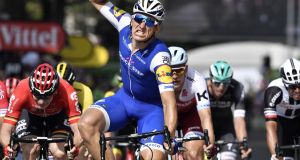 Germany’s Marcel Kittel celebrates as he crosses the finish line ahead of Germany’s Andre Greipel at the end of the sixth stage of the Tour de France between Vesoul and Troyes. Photograph: Getty Images

En route to Troyes the Tour witnessed something new: a cyclist wearing a yellow jersey, riding along a tightrope suspended high above a field on a roadside as the peloton sped past. Le Tour has not seen un funambule at the roadside before – or at least that was the consensus – but the term is often used to refer to the sprinters, who walk a metaphorical tightrope at every flat finish, with a fine margin between staying upright and a disastrous fall.

The sprint here was spectacular, with a second victory in five days for Marcel Kittel, who looks to have returned to his dominant form of 2014, but the German for one said he saw no sign that anything had calmed down since the disqualification of Peter Sagan on Tuesday after the crash that put Mark Cavendish out of the race. “[There is] no difference. There are two sprinters less but it’s still the same fight, everyone wants to be in front, everyone is trying to defend his position,” he said. “The nature of sprints is a mess.

“It’s all about keeping your line - as long as that is alright there is no discussion. The jury made their decision. I see it as being like a decision in football, where the referee makes a call and this is what we have to accept. That’s what I do.”

The Sagan saga will continue to provoke debate, but yesterday the Court of Arbitration in Sport rapidly scotched an attempt by his Bora-Hansgrohe team to overturn Tuesday’s decision and reinstate the Slovak, which would have created chaos in terms of how this race is run. With Tuesday in mind, the metaphorical tight rope loomed large in the final 200 metres, as the string of sprinters emerged from a twisting chicane to enter a very short finish straight.

While Kittel bided his time, his rivals massed on the right-hand side around Andre Greipel, and as the points leader Arnaud Demare made his move, the Frenchman flirted with disaster. First he directed a slight push with his head at Alexandr Kristoff, which was nothing to compare with the barrage of butts that earned Mark Renshaw disqualification in 2010, but earned an angry wave from the Norwegian nonetheless.

Immediately afterwards, in a mirror image of the move Cavendish was attempting to make on Tuesday when Sagan shut the door, Demare negotiated a tiny gap between another Norwegian - Edvald Boasson Hagen – and the barriers, with his front wheel all of a few inches from the projecting “feet” of the barriers. Luckily, “Eddy” stayed where he was. Finally, as Demare drove for the line his effort pushed him towards the barrier, and he was forced to dodge another foot. All this at 40 mile per hour or so in a few seconds.

Kittel went for a different option, scything around the outside of the small mass of leaders in the clear, with no one in his way; it was a risky choice, because he needed to be travelling several kilometres per hour faster, but he clearly has speed to burn. “Last year, I was going earlier, but Mark Cavendish kept coming past me at the end, so this year, I’m leaving it later,” he explained.

It gave him a margin of a complete bike length over Demare, who is looking increasingly nailed-on to carry the points jersey to Paris. Just behind, the young Briton Dan McLay showed signs that he may be running into form, taking eighth place, his best result of the Tour so far in spite of misjudging the chicane. On Friday, in Nuits Saint Georges, he has a further chance to improve. Without Sagan and Cavendish, however, this can hardly be considered a vintage year for the sprinters.

On the long road west from Vesoul in heat well into the 30s, where combine harvesters were busy in the cornfields around General Charles de Gaulle’s home village of Colombey les Deux Eglises, this was a day to be enjoyed if you were Chris Froome, who thrives in the heat. The race leader said afterwards that this was a rare chance for the riders to proceed steadily - an average of 42 kilometres per hour is not a potter by any stretch of the imagination – while actually relaxing a little on their bikes until the final flurry. Guardian Service

Both Nicolas Roche and Dan Martin finished in the main peloton at the end of stage six, crossing the line in the same time as the bunch sprint winner Kittel (QuickStep Floors).

Neither were involved in the sprint; Roche was 37th and Martin was 52nd. The latter was second on Wednesday’s mountain stage to La Planche des Belles Filles and received an additional morale boost by virtue of teammate Kittel’s victory.

Although Roche’s role in the race is to ride for his BMC Racing teammate Richie Porte, he too is well placed. He is 21st overall, two minutes and 14 seconds back.

The goal for both riders will be to steer clear of any trouble on Friday’s seventh stage, which runs 213.5 mainly flat kilometres to Nuits-St Georges. Another bunch sprint is the most likely outcome, although breakaway riders will try to foil Kittel and others. Shane Stokes