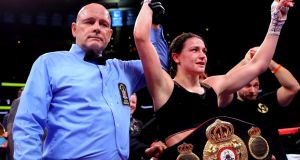 Katie Taylor will take on WBO champion Rose Volante in Philadelphia on St Patrick’s weekend as the Irish fighter bids to unify the lightweight division titles.

Taylor holds the WBA and IBF belts on the back of her unbeaten 12-fight career as a professional and will take on Brazil’s Volante, who is unbeaten after 14 fights.

For the first time in her professional career Taylor has been ranked the best female pound for pound boxer in the world.

The most recent ratings by the respected Boxing Rec organisation has Taylor ranked above all of the other boxers and now five points higher than the Belgian Delfine Persoon, who used to hold the number one position and also holds the other three lightweight titles.