Keeping up with the neighbours a mighty task for Kildare 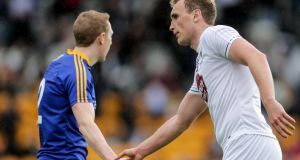 Kildare’s Tommy Moolick shakes hands with Patrick Fox of Longford after the victory in the quarter-final replay at Tullamore. Photograph: Laszlo Geczo/Inpho

Kildare and Dublin have met at interesting junctures in their respective histories. This weekend in Croke Park both is and isn’t one of those occasions. Kildare aren’t expected to do any better than gallantly lose and haven’t actually beaten Dublin as All-Ireland champions since the 1903 season.

On the other hand, the champions are on the road towards what they hope will be history. Defeat mightn’t derail that project but it would be a sensation.

The counties’ fortunes aren’t entirely separate, though. Some of Dublin’s biggest successes have been helped along by the standards Kildare have set – like the protracted All-Ireland of 1903 when the ‘home’ final against eventual champions Kerry went to two replays.

The sequence is widely credited with establishing football as a major spectator sport, an achievement the counties would repeat in the 1920s to make it the pre-eminent sporting attraction in the country.

Kildare came back to win a first All-Ireland two years later and challenged, Dublin responded with a three-in-a-row from 1906-08.

One hundred years ago, by coincidence, Dublin halted Wexford’s attempt at five-in-a-row, the first in GAA history but Kildare won that year’s All-Ireland, driving Dublin to another three-in-a-row in the early years of the 1920s.

Even Dublin’s most fabled era, the 1970s, has a Kildare story. The counties met in the 1974 NFL Division Two final and Kevin Heffernan’s team lost, leaving no traces of what would be an imminent championship breakthrough.

Paddy Cullen, goalkeeper on the team and a future Dublin manager, had been around long enough to know that nothing was guaranteed in the fixture, having lost his only two championship matches against Kildare, but he said this obscure league final had an impact on the summer to come.

“We met in the Holyrood Hotel for dinner that evening and the conversation was all about how seriously did we want this – how tired were we of getting beaten all the time? We had lost something, not anything important, but something we should have won.

“Heffernan was pushing it and everyone was on the same hymn-sheet and attitudes changed. People got serious about what they were doing. Heffernan’s position was that ‘we’re in this to win and if you’re not, just tell me now and we’ll shake hands and you can walk out that door’. That’s the way it was.”

Little over two months later, they reversed the league outcome in that July’s Leinster semi-final.

Given that the county had been so influential in the first 50 years of the GAA and remains one of the most enthusiastic in terms of activities, why have Kildare failed to win – or hardly contest – an All-Ireland since 1928 while their neighbours to the north, have banged off 14?

Eoghan Corry, GAA historian and writer (his 1989 book Catch and Kick is dedicated to ‘the next Kildare team to win an All-Ireland’) believes that it proved difficult for his county to adjust to a decline in prominence.

“Kildare have tended to be a top-10 team most of the time but they have very little to show for it over the years. There has been a sense of arrogance historically because they were so important in bringing Gaelic football from the margins of Irish sport, a rural, out-of-town activity to being centre-stage.

“Until the 1920s, attendances at rugby or soccer internationals would exceed those at football and Kildare were participants in bringing Gaelic football ahead and setting new milestones. Since 1929 it has been the biggest spectator sport in Ireland.

“Kildare historically found it difficult to accept that it wasn’t at the heart of this anymore.

“Even though two entire generations have grown up since Kildare last won the All-Ireland, there is a sense that the game is very strong there, still a very strong spectator sport. Even junior matches can get 3,000 or 4,000 attendances but at county level, Dublin are currently so far ahead that a sense of fatalism – that we will never actually reach that level – has set in.”

While Kildare laboured after 1928, Dublin didn’t do a whole lot better, winning one All-Ireland in 35 years between 1923 and ’58 but there was a world of difference between those years. Until the 1920s Dublin had benefited from the requirement that those in the city for work-related reasons, had to play for their county of residence.

Ironically, this allowed them to enlist one of Kildare’s great players, Larry Stanley, who was also an Olympic athlete.

Captain of the 1919 All-Ireland champions, Stanley was a Garda, eventually stationed in Dublin and upset at having been suspended by his own county for allegedly ‘not trying’ in a tournament match against Kerry - a charge with unspoken suggestions of betting irregularities.

According to Matthew Hussey’s biography of Jack Higgins, another Kildare star of the era, Stanley’s team-mates were outraged and in a signed letter to the authorities called for his reinstatement, which was refused.

Although rules on declaration changed, which allowed him play again for his own county and return to Kildare for the 1926 championship, he had lined out for the third of Dublin’s three-in-a-row in 1923.

By the 1950s the St Vincent’s revolution had taken place, insisting that Dublin players came from the county and, under the captaincy of Kevin Heffernan, the 1958 All-Ireland was won.

The age of revolution

Heffernan’s arrival as manager in the 1970s came at a time of hardship for Dublin. In the words of Paddy Cullen:

“We were going around getting beaten by Westmeath in the championship in the late 1960s. Anyone and everyone was having a go at us at that time. Kildare actually had a very good team around that time even if they didn’t win anything big.”

As has been exhaustively chronicled, the new Dublin manager began by insisting on unheard-of levels of fitness, believing that an ability to outlast opponents would in itself be enough to win some matches.

“All of a sudden we were getting bigger and better,” says Cullen. “He wanted us to be able to go for 90 minutes [in those years, championship matches lasted 80 minutes]. We all believed it and it worked.”

This combined with a sharp tactical appreciation of how to exploit the upgraded capacity sent Dublin and Kerry, as Mick O’Dwyer cottoned on to the new approach, into a different orbit, which left Kildare resolutely earth-bound, according to Eoghan Corry.

“In 1974, Kildare were completely oblivious to the fitness revolution that Kevin Heffernan was about to launch. Things would end up passing them by. Two of the most one-sided Leinster finals of all time were in 1975 and ’78. There was a great degree of talent in the Kildare team but the evolution of the game was leaving them behind.

“Kildare weren’t part of the coaching and fitness revolution despite having been to the forefront of virtually every previous one.

“They spearheaded the first fitness revolution in the 1900s when collective training was introduced. They pioneered the hand-pass – there’s arguments over who invented it but Kildare were the most successful exponents – and the hand-to-toe solo was also a big tactic in the county.”

Now, all they could do was watch

Return of the Mick

Kildare’s eventual reawakening had echoes of the 1970s when Mick O’Dwyer, having broken records with Kerry, took over the county in 1990. Within months, he had secured promotion to Division One and a place in the league final against Dublin, managed by Paddy Cullen.

“We were fairly lucky,” he recalls, “that a Vinnie Murphy shot from about 40 metres dropped into the net over the ’keeper’s head. We won and I said to Mick afterwards on the pitch that we had got away with it and that we had been lucky with that goal at the end.

It took two tours of duty but seven years later, and after five championship failures to beat Dublin in the 1990s, O’Dwyer delivered Kildare’s first win in the fixture for 26 years to set up the county’s only All-Ireland appearance since 1935. However frustratingly, Galway were too good.

“The weight of expectation on the players was intense,” according to Corry. “It’s a GAA-mad county, especially for somewhere that hasn’t won anything in so long. If they had won they would have got rid of all those inhibitions. I’m not saying they would have dominated because there were good teams around at the time but the psychological blow of losing was significant.”

The irony of Kildare’s burgeoning population, says Corry, from a GAA perspective is that much of it comes from the surge in the capital’s population.

“The support base has been seriously affected by the spillover from Dublin into Kildare. From 1971, the population has gone from just over 70,000 to 220,000 so it has effectively trebled in a 45-year period. When Dublin are playing the huge estates of the big towns in North Kildare – Leixlip, 22,000; Celbridge 24,000; Naas, 23,000 – are spilling out cars onto the road that are waving more blue flags than white.

“This means that of the thriving, under-age culture in Kildare an awful lot are actually Dublin supporters. There is a sovereignty issue!”

1 Rory McIlroy steadies the ship after shaky start at US PGA
2 Andy Farrell raring to rekindle Ireland’s Six Nations title tilt
3 Solid start leaves Shane Lowry’s US PGA hopes firmly intact
4 RG Snyman primed for hectic run with Munster and South Africa
5 America at Large: When not taking one for the team is the wisest course of action
Real news has value SUBSCRIBE