All 20,000 starting spots have been sold for the race which takes place on October 28th 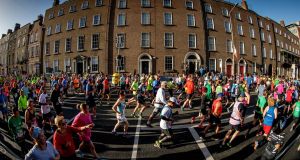 Five months before the starting gun is fired all 20,000 entries for the 2018 SSE Airtricity Dublin Marathon have now sold out.

The 39th running the event, set for Sunday October 28th, sold out in early July last year, and once again reflects the growth in marathon running as a mass participation sport.

The limit of 20,000 race entries was set two years ago, the maximum the course can allow under its current guise, although there is clearly room for yet further growth.

It was two years ago when the event was moved from its traditional Bank Holiday Monday to the Sunday, which race director Jim Aughney says directly contributed to the sell-out of 19,500 runners that year, a 30 per cent increase on 2015.

A statement from the marathon organisers this afternoon said they were “delighted” to confirm the 2018 event has now sold out.

The event started in 1980 with 2,100 runners. This year’s race will also mark and celebrate female participation, linking with the nationwide commemoration of Vótáil 100. Constance Markievicz, a key campaigner for Irish women’s voting rights, will appear on the SSE Airtricity Dublin Marathon finishers’ medal.

There are however still entries available for the countdown series of races: The first of the race series will kick off with the South Dublin 10K on Sunday July 22nd.