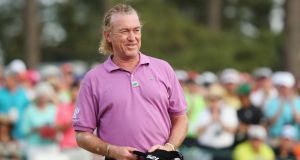 Spain’s Miguel Angel Jimenez reacts on the 18th green after the final round of the 2014 Masters Tournament at Augusta National Golf Club. (Photograph: Andrew Redington/Getty Images

No sooner had the seemingly ageless Miguel Angel Jimenez secured fourth place at the 78th Masters on Sunday than he turned his attention to winning back a place in Europe’s Ryder Cup team.

The Spaniard capped a memorable week by reeling off four birdies in the last nine holes to finish with a 71 and a four-under-par total of 284, four behind championship winner Bubba Watson.

Jimenez featured in the Ryder Cup in 1999, 2004, 2008 and 2010. He missed out on the remarkable comeback win over the US in Illinois two years ago and is determined to win a place in Paul McGinley’s side in Scotland in September. “I’m going to play on the Senior Champions Tour next week and then I plan to focus on the Ryder Cup,” the cigar-puffing 50-year-old said at Augusta National. “I need to play on the European Tour for that. I would like to help Europe defend the Ryder Cup. I would love to do that.”

Sparkling form
Jimenez said his sparkling form and that of fellow 50-somethings Bernhard Langer and Fred Couples was down to improved fitness levels and equipment. “They are being more healthy. I love the game, I love competing and probably that is the reason. Technology helps too. But if you don’t know how to hit the ball then technology doesn’t do anything.”

Jimenez, who had his best Major finish when he was tied for second behind Tiger Woods in the 2000 US Open at Pebble Beach, believes a Champions Tour player could one day prove victorious in one of golf’s big four championships. “Why not? Couples played nice, Langer played nice, I played nice too. If you don’t want to be here at 50 you shouldn’t be here.”

Sky Sports customers save on bills; rule changes could change rugby utterly 07:25
Uefa meet to re-evaluate hopes of finishing current season 06:48
Gerry Thornley: Changes to tackle laws could transform rugby by time of next World Cup 07:18
Sky Sports customers set to save on bills until Premier League returns 07:31
My favourite sporting moment: Phil Mickelson’s miracle shot at the 2010 Masters 06:41
Here is your handy guide to sport on television this week