Dane rides solo to victory in rainy and cold weather, dropping rivals with 13km to go 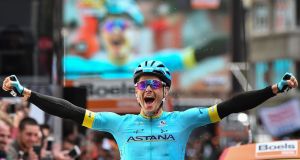 Fuglsang, who finished 10th last year, nearly crashed with 5km to go on a fast descent on wet and slippery roads. He dropped all his rivals with 13km to go.

In a rain-hit event with temperatures as low as six degrees, Fuglsang won the 256km race in six hours, 37 minutes and 37 seconds – 27 seconds ahead of Davide Formolo, who finished second, while Maximilian Schachmann finished third. Annemiek van Vleuten won the women’s race with Floortje Mackaij and Demi Vollering completing an all-Dutch podium.

Dan Martin was a non-finisher. The event had been one of his key season targets, but on Saturday he admitted he wouldn’t have the form to contend for the win due to a recent illness.

Eddie Dunbar (Team Sky) was the only other Irish man in the race and rode solidly, placing 75th.