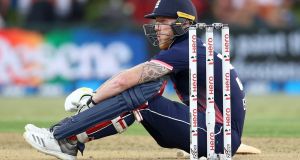 Ben Stokes reacts after being hit by the ball during the second one-day international (ODI) cricket match between New Zealand and England. Photograph: Getty Images

England all-rounder Ben Stokes said he was relieved to be back performing well for his country after missing the Ashes because of an ongoing court case.

He appeared at Bristol Magistrates’ Court earlier this month charged with affray along with two other men. This was relating to an incident outside a nightclub in Bristol on September 25th last year. English media outlets released video footage of the incident.

A 27-year-old man allegedly suffered a fractured eye socket in the incident, at which fellow England cricketer Alex Hales was also present.

On Wednesday however, Stokes put in a man-of-the-match performance with an unbeaten 63 and two wickets for 42 runs as England drew level in the one-day international series against New Zealand with a six-wicket victory in Mount Maunganui.

The 26-year-old told Sky Sports: “It’s an amazing feeling to be back in amongst the team with all the lads and even the backroom staff. I was a bit emotional walking off that field.

“I hope this is a stepping stone for things to come in the future, the things that we’ve got coming up.”

Asked if he felt under pressure, Stokes replied: “When I walked out there it was the normal feeling that I get when I walk out there.

“The one thing I wanted was to be back and walking out there and representing my country.

“It’s all about building for the future. We’ve got a really busy summer coming up. It’s great to be back with the boys.”

Stokes judged that his bowling performance was rusty after only his second game for England since September, with the first coming in the opening ODI which ended in defeat to New Zealand in Hamilton.

He said: “Nothing replicates match bowling — you can’t get that in training. Hopefully I’ve got those cobwebs out.

“The batting feels in good order and the bowling will come with time.”