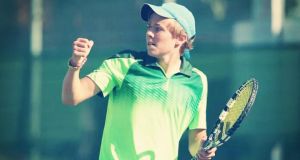 Bjorn Thompson, whose mother is from Limerick, was spotted playing in a tournament in Japan.

The names Bradenton, Florida and Nick Bollettieri have occupied the tennis world now for four decades. The very words kick up the names of past glories and impossibly glamorous stardom. Sharapova. Courier. Seles . Agassi.

To some it’s a machine that spews out tennis prodigies in a conveyor-belt style and to others it’s the Mecca of tennis tuition. One thing that is without doubt is that the venerable Bollettieri, now aged 83, knows that tennis success comes at a price. Irish teenager Bjorn Thompson, who is not named after Borg or ABBA, can now call the Florida academy home. Last December Thompson, whose mother is from Limerick, was spotted playing in a tournament in Japan by an official from the International Management Group (IMG).

The IMG company joined forces with Bollettieri in 1985 and turned his tennis school into a multi-sport training facility, known as IMG Academy, a sprawling campus set over 400 acres. An invitation was issued to Thompson. It was accepted.

“Our private school was built for serious athletes. Our student-athletes work hard and play hard to take their game to the next level,” boasts the IMG mission statement.

Thompson, who apart from travelling the world, has lived in Birmingham all his life. But he is affiliated to Irish tennis.

“It all started in Japan,” he says. “It was there I met one of the IMG coaches called Chip Brooks. He invited me over to train for a week for the Eddie Herr (an international junior tennis tournament that has served as a springboard to the professional tennis tour for many including Roger Federer, Maria Sharapova, Andy Roddick and Anna Kournikova and is played at the end of the year at the academy in Florida) and then I trained pretty well.

“I made the third round of the Eddie Herr and the semi-finals of the doubles. Then one guy asked me if I would like to go back if he could get me in and I was able to get a full scholarship.

“That was in December of last year. It was a very big moment. I train there now full time. I use the academy in Florida as my base and I travel to tournaments. I live there on campus with my roommate, who is from Denmark.”

Thompson’s regular coach is Jorge Gonzalez but he has been on court with founder Nick, who remains sprightly and in good health. Despite his vast wealth, he’s hands on and travels to the major tournaments.

Life under the microscope he says is not as brutal as people make out. Competition stays within the confines of the courts. They usually travel together with coaches to tournaments and the academy is more of a fraternal campus than some latter day Darwinian experiment of survival of the fittest.

“I’m really happy in the academy,” Thompson says. “The training is competitive but the environment is really nice. Everyone wants to help each other get better. It’s not that cut-throat.

“I’ve met Nick on court quite a few times. He’s really good, certainly knows what he is talking about. He’s very good although he is not my individual coach. I work with Jorge Gonzalez (who coached Britain’s Heather Watson).”

These past few months have been a clay-court experience, his weakest surface. His ranking has dropped and probably won’t get him into Wimbledon juniors and the US Open juniors is now his goal. Like the thousands who pass through Bradenton, the goal is a common one. To make it in professional tennis.

“I’m in Germany now and I’m going to play a few more tournaments in Europe,” he says. “Then I go back and try to get into the US Open. I’m not sure about Wimbledon because I’m not sure I’ll get in. It’s based on ranking. Before I was 70 but now I’ve been a couple of months here and have dropped to 125.

“But I should be able to push back up for the US Open. I’ve been playing on clay, which is my weakest surface. I’m trying to get a lot better on it. But I prefer the hard courts in the US.”

“I’ll decide on a scholarship offer with a college if I don’t go on the tour,” he says pragmatically. “I haven’t made that decision yet. I would like to be a full-time pro. It would be difficult and would depend if I was ready for it or not. I hope to find that out over the next year.”

As always in tennis, the future is fraught. For the present, Bollettieri’s school and Florida are just fine.