€300,000 ‘mobile’ base would allow for consistent coaching, says performance chief 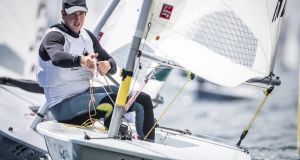 Irish Sailing has revealed plans for a new Olympic team base in the home port of Olympic silver medallist Annalise Murphy. In a week of major announcements for Olympic sailing, the €300,000 base at Dún Laoghaire follows Murphy’s own announcement last week of a switch to a double-hander for Tokyo 2020. And, at its mid-term meeting, World Sailing has confirmed a major shake-up for the Paris 2024 Olympic Regatta.

The national governing body says its plans for a “mobile” performance headquarters, constructed out of shipping containers on the grounds of the Commissioners of Irish Lights in Dún Laoghaire harbour, “will finally give the team a place to call home”.

Until now, campaigners have been facilitated across Dún Laoghaire’s waterfront yacht clubs but space – or the lack of it – has become an increasing problem, according to Irish Sailing.

The new proposals, subject to planning permission, will house the senior Irish sailing teams with a view to “improving training opportunities” on home waters but the blueprint also provides a transportable facility capable of being shipped abroad to provide a base for sailors overseas at international events as well as Olympic Regatta itself.

“It allows for consistent coaching, a base for equipment and our own direct access to the water,” performance director James O’Callaghan says.

The new base, the costs for which have been met by Irish Sailing’s Olympic fundraising foundation, will consist of three converted shipping containers that has space for briefings and education, a gym, gear storage plus a boat maintenance area.

In addition, there will be a boat park and a pontoon for launching dinghies such as Lasers and 49er skiffs, as well as Murphy’s new 49erFX.

In making the announcement, Irish Sailing president Jack Roy said “when philanthropic generosity is combined with a passion for Irish sporting success on the world stage we see results – in this instance a performance HQ”.

Subject to planning requirements, it is hoped that work will be completed by end of summer 2018.

Meanwhile, World Sailing’s mid-year meeting has confirmed 10 events for the Paris 2024 Olympics. While five Tokyo 2020 classes will continue unchanged to Paris, including skiff and Laser classes that are most relevant to Ireland, it appears both Finn and 470 dinghies status who were facing the axe may have been thrown a lifeline.

Current world champions Shane McCarthy and Andy Davis were winners of the GP14 Ulster Championships at Donaghadee on the Ards Peninsula last weekend. Second overall in the 23-boat fleet was Ger Owens and Damien Bracken. Keith Louden and Alan Thompson were third.

The Flying Fifteen class heads north for its first championships at Ballyholme Yacht Club this weekend for many years. The event, doubles as the first qualifier for 2019’s World Championships at the National Yacht Club on Dublin Bay. More than 20 boats are expected with Strangford Lough’s Brian McKee and Ian Smyth defending their title.

Sigerson Cup final: Pat Critchley looks to defy the odds against DCU 17:01
Who is Caelan Doris? Meet Ireland’s newest rugby international 15:55
James McClean: ‘if you ask my family they’d prefer Bosnia away’ 15:22
Sene Naoupu: ‘I believe we’re on the verge of something special this season’ 15:00
Catalan Dragons slammed for signing Israel Folau 14:00
Here is your handy guide to sport on television this week