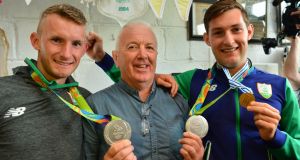 Relentless, crewed by three Corkmen and a Dubliner, slotted into third in the rankings in the Atlantic Challenge rowing race on Thursday evening.

A British crew, The Four Oarsman, had set the very early pace in the 5,000 kilometre race from La Gomera in the Canary Islands to Antigua. Boats finally took to the water on Thursday morning after a two-day delay because of high winds.

Damian Browne, rowing solo, was the last of 25 crews to leave La Gomera, but he has started well, finding himself second in his class. A third boat from Ireland, Home to Portrush, stood sixth in the rankings of fours.

Back in Ireland, a big group of top rowers is set to train at the National Rowing Centre in Cork as part of a high performance camp.

However, the Dam Buster head of the river, scheduled for Blessington on Saturday, has been cancelled because of concerns over the weather. This was to be the inaugural run for the head, run by Carlow Rowing Club, and it had sparked interest and drawn a good entry.

The recent bad weather has highlighted the value of indoor rowing, which has been thriving. Fisa, the world governing body, have just announced the first World Rowing Indoor Championships. The championships will be held in Alexandria in Virginia in the United States on February 17th and 18th.

“Participation in indoor rowing at an elite and competitive level has been skyrocketing in recent years and it is time to give the sport an official championship status,” said FISA president Jean-Christophe Rolland.

This Saturday, December 16th, the Row-the-Shannon, Carrick Charity Challenge gives anyone who fancies it a chance to take to an ergometer in the open air. The event is set for Carrick-on-Shannon Retail Park.

Just down the road from Carrick, Lough Rynn is set for a big year. The Tribesmen Head of the River is scheduled for February 10th, while the Lough Rynn Regatta, a full status event, is set for May 5th.

The awards season continues to highlight how a good a year it was for Irish rowing. This Saturday, Dominic Casey will be one of the nominees for RTÉ Sport Manager of the Year. Casey coached both of the Ireland crews which won gold at the World Championships.