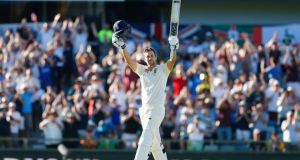 England’s Dawid Malan celebrates his century during day one of the third Ashes Test in Perth. Photograph: Jason O’Brien/PA

On a ground that has often been a graveyard for English cricket Dawid Malan kept alive hopes of heading for Melbourne with the destination of the Ashes still undecided. Malan hit his maiden Test century, an innings of great character, a bit of luck and some silky strokeplay. His unbroken partnership of 176 with Jonny Bairstow, belatedly promoted to No6, was easily the highest England have managed in the series. Thus the tourists managed to finish the first day on 305-4 after Joe Root had won his third toss of the series.

Malan did not suggest too much permanence at the start when he was peppered with a stream of short-pitched deliveries. He was determined to do more than duck, sway or fend. There were two top-edges over the keeper’s head, one of which went for six, and there were a few swishes at fresh air as well. But he survived and as his innings progressed it became more assured. There were elegant cover drives, whether the bowler was the deadly Nathan Lyon or Josh Hazlewood, but nothing bettered the pull shot against the second new ball which took him to three figures.

That second new ball should have dismissed Malan, on 92, at the first attempt but Cameron Bancroft at third slip spilled the catch. So, alongside Bairstow, Malan was able to negotiate the critical nine overs against the second new ball with no losses and just a few alarms at the end of a day that offered some riveting entertainment.

We had been warned that we might witness a pale shadow of the superfast tracks of two or three decades ago but the suggestion that the Perth pitch is now a pudding may have been overstated. This one may be slower than the golden days but in the final Ashes Test on this famous West Australian strip of turf the ball still flew through faster than it does on any other pitch in this country or around the world – with the possible exception of the Wanderers in Johannesburg. Hence there were some captivating duels unless you happened to be Mark Stoneman, who was hit full on the helmet from a well-directed short ball from Hazlewood. It is just as well that Stoneman is not a club cricketer since he would now be penniless; his helmet had to be replaced and he broke his second bat of the tour during another plucky innings.

The right team was bowling to highlight that there is life in the old pitch yet. After the Australians had bowled prettily and full for 90 minutes, they changed tack. The opportunities to drive diminished. Since the ball was obstinately declining to swing the trio of tall pacemen pulled their length back and the ball whistled through to the keeper; sometimes it sailed wastefully over Tim Paine’s head but when it was chest height batting became more of a trial, albeit one with compensations. This surface is true; the outfield is like glass so there are plenty of boundaries out there. England’s slower pace bowlers may not be able to exploit the bounce so easily. Three hundred here would have been worth 400 at Brisbane and Adelaide.

The full-length ball, favoured by the Australians at the start, accounted for Cook. A Mitchell Starc delivery thudded into the pads and Cook knew – even without the statutory glance at his partner – there was no point in seeking a review. Cook has been striving fiendishly hard to recover the magic; it is even possible that he is working too hard but he has always reckoned that hard work brings its rewards in the end. If everything had been functioning smoothly he would have hit that Starc delivery.

Meanwhile Stoneman was racing away, clipping full balls through square leg with aplomb as the pacemen searched in vain for swing. James Vince, you’ve guessed it, settled impressively; there was the odd sweet cover drive. But soon he was tied down by Hazlewood; Smith removed his short-extra cover to slip leaving an inviting gap and then Vince with one eye on that gap and another on lunch drove away from his body with no foot movement and was caught behind. Patience is running thin with him, even though he tantalises.

After the break there was a little flurry of boundaries for Joe Root while Stoneman had a torrid time against Hazlewood. He did manage an upper cut boundary to reach his third Test half-century but in the next over against Hazlewood, Stoneman was dropped at first slip by Mitchell Marsh; then he was hit on the helmet and, after an appropriate delay for recovery and inspection, he was almost caught at short point after spooning another bouncer in that direction.

Yet it was Root who departed next caught down the leg-side off Cummins; the namby-pamby full-length bowling had been abandoned and the Australians were looking far more dangerous. Soon after Stoneman fended at another fierce lifter from Starc but was given not out by Umpire Erasmus after the ball had ended up the gloves of a jubilant Paine. The third umpire, Aleem Dar, did not dally long and overturned the decision. It may be that he reached the right conclusion in the wrong way. Initially the replays did little to provide conclusive evidence that Erasmus’s decision should be changed. After Dar had sent his message another replay surfaced, which suggested the ball may have grazed Stoneman’s right glove.

At 131-4 it felt like the same old story but Malan and Bairstow, now batting with a fine mixture of aggression and discretion, stayed together for 51 overs, which must have cheered up English men and women with tickets for Melbourne on Boxing Day.