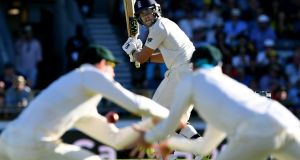 Dawid Malan joked about overcoming the jump from facing “78mph dibbly-dobblies” in county cricket to a phalanx of Australia fast bowlers at the Waca following a maiden Test century for England that left him close to tears upon reaching the milestone.

The 30-year-old arrived at the start of the tour as one of three “no-name” batsmen in the England lineup, according to the former opener Matthew Hayden and sections of the local press. But he will leave with his reputation having leapt like the speeds he is now facing out in the middle.

His unbeaten 110 in Perth – one of bravery, skill and attacking intent – was witnessed by his parents, who had flown over from South Africa to watch their son in action. When he pulled Josh Hazlewood for four to prompt the fist-pumping celebrations, his thoughts turned to them.

“It was so emotional. I didn’t really know what to do,” said Malan, who embraced his mother Janet upon leaving the field at the close. “I almost started crying, to be honest. To do it in front of them, the amount of sacrifices my old man and mother have made along the way to get me here, it’s nice to repay them for all the time they’ve given me.”

Malan was born in Roehampton but went to school in Paarl, 40 miles from Cape Town, before returning to England for a gap year of playing and coaching. His father, Dawid Sr, played league cricket in Middlesex and it was here where the left-hander caught the county’s attention and turned professional.

Speaking after the close on day one, and still beaming at his breakthrough innings after three previous half-centuries, Malan admitted his 11 years in the domestic system had not quite prepared him for the challenge of facing Mitchell Starc, Pat Cummins and Hazlewood.

He said: “You play county cricket and you’re more worried about your front pad getting blown off, or nicking off to 78mph dibbly-dobblies. So I’ve really enjoyed the challenge of facing these guys: not only technically, but they test your heart as well.”

While a prominent Lions players in the past two years – and a consistent first-class run-scorer in the last four – it was his 78 from 44 balls on his Twenty20 debut against South Africa in June that demonstrated to the head coach, Trevor Bayliss, his temperament might transfer to Test cricket.

Sent sprawling by a Kagiso Rabada yorker on the debut that followed, and grinding out fifties against West Indies, it is fair to say he was not feared by Australia at the start of this series, with Hayden’s comments about him, Mark Stoneman and James Vince certainly registering.

Malan said: “Every time you open a newspaper (here) you’re reading about how bad you are. It’s nice to tick a box and prove to yourself that you can play at this level. With anything you do, it’s self-belief. You need to feel like you belong.

“I might never get a run again in Test cricket but I have that belief I need to perform at this level. I was under a bit of pressure coming into the game. So it was nice to score some runs, and when the team needed it. I feel I’ve played pretty well in the other games. It was just making sure that when I did get in I was ruthless enough to get through the tough periods.”

Though streaky early on when Australia’s quicks were roaring in during the afternoon – one four pinged off the helmet and was wrongly given as runs, while a top-edged six off Starc flew over the keeper – Malan soon settled down in a controlled innings that, with Jonny Bairstow’s 75 not out from No6, turned a troubling 131 for four into a promising 305 for four by the close.

A chance was offered on 92 when put down at second slip by Cameron Bancroft off Starc. But this, explained Malan at the close, was crucial in clearing his mind ahead of registering the first Test century by an England batsman this series.

He added: “I’m thinking I’m two or three shots away from scoring a hundred, and I premeditated that shot a little bit, set him up to clip him through mid-wicket. It was good to get me back in my box. I walked out today and I thought, I’ve got nothing to lose. See ball, hit ball. It was my day.”