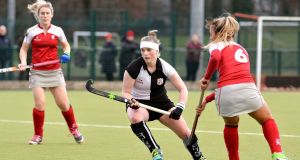 Cork Harlequins have the rare enough treat of a home game this weekend as they look to end 2017 as the only unbeaten side in the Hockey League.

Five wins and three draws from their games so far have put them second from top, trailing defending champions UCD by just a point.

Remarkably, seven of those eight fixtures have been away from home, five in Dublin and two up North, which makes that unbeaten record all the more impressive. If they can make good use of home advantage in the new year, when seven of their nine games will be at Farmers Cross, then their challenge will be comfortably maintained.

With 22 goals, Stephen Dale’s side are the league’s top scorers, Naomi Carroll heading the list with seven, her international team-mates Róisín Upton and Rebecca Barry contributing another seven between them.

In contrast, goals have been hard to come by for their opponents on Saturday, only bottom club Monkstown scoring fewer than Ards in the campaign so far.

Their strength has been at the back, conceding just seven goals in eight games, and they restricted Harlequins to just one when the sides drew back in October.

Railway Union moved above Ards in to fourth last weekend with their victory over Pembroke Wanderers, and they have a chance of leapfrogging Pegasus in to the third spot if they can get the better of the Belfast side at Park Avenue on Saturday.

Loreto are away to Belfast Harlequins and in need of a win to revive their challenge, two defeats in their last three games seeing them drop to sixth. Leaders UCD, meanwhile, are at home to second-from-bottom Trinity on Sunday.