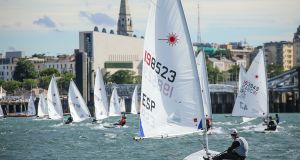 Ireland's next generation of Olympic sailors are putting in a strong performance at the top of the KBC Laser Radial World Championships as the regatta enters its final rounds off Dún Laoghaire on Friday morning.

Provisional results – with nine protests pending – show 41 points separating the top 10 boys in a massive 229-boat fleet that currently includes two Irish boys who might yet match Ireland’s previous success at under-17 level by Saturday’s conclusion.

After three days of light winds it was all change yesterday when fresh westerlies blew up to 23 knots for the 350-boat fleet. It blew in favour of the Irish team too, with gains being made by Irish sailors in both boys’ and girls’ divisions.

It hasn’t been all plain sailing for the Howth youngster though. He made a slip on Thursday morning when he took a second yellow penalty flag at the start of race six. Lined up second from the pin end of the line, McMahon was penalised by on-the-water umpires for pumping his sail, a technique he says he used only to stop him crashing into other boats after the race was stopped.

Although that start was abandoned, McMahon – counting two yellow flags – was forced to sit the race out. It’s a decision he is appealing as he claims the pump occurred when the fleet was no longer in a start sequence.

“I was on the back foot after that because others had a race in hand and knew how the wind was shifting,” he said. The Howth youngster went on to lead the next race for a time before losing out on a left-hand shift and finishing seventh in race seven.

Behind McMahon is Royal St George’s Conor O’Beirne, with two race wins to his credit, in seventh overall. Next is Royal Cork’s Johnny Durcan in 12th and former Topper world champion Liam Glynn from Co Down is 16th.

In the girls’ division, Norway’s Caroline Rosmo still leads despite a black flag disqualification in race six, with Dún Laoghaire’s Nicole Hemeryck now fourth overall after scoring a 10, 2, 6 in the 76-boat fleet on Thursday.

Ireland has previous success at World Radial youth level. Seven years ago, Wexford’s Philip Doran took the Under 17 world championship title in Japan. A year earlier he won the Under 16 title. In that same year, 2009, Annalise Murphy, then aged 19, won the Under 21 world title. These were followed by three youth world sailing medals in the past four years.

Light winds also hampered the early stages of the Topper World Championships on Belfast Lough this week, causing some races to be abandoned. After three days racing from Ballyholme Yacht Club, the lead in the 5.3 division after four races is held by junior sailor Sam Cooper from West Lancashire. Second is Lough Derg and Royal St George junior Jack Fahy.