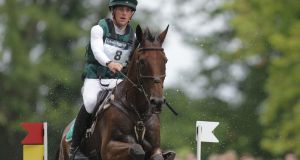 The three-rider team from New Zealand – Mark Todd (Leonidas), Tim Price (Bango) and Jonelle Price (Grappa Nera) – who were lying fourth after dressage, now leads the CCIO4*-S competition on a total penalty score of 94.9. Ireland is next on 99.5 (up from fifth) while the first-phase leaders, Sweden, have dropped to third (103).

Carlow’s Watson was one of just seven riders to go clear within the time allowed over the fixed fences and, riding the 13-year-old Irish Sport Horse gelding Imperial Sky, heads into Sunday’s concluding show jumping phase on a score of 27.7 penalties. Todd and Price were also home inside the time to lie second and third on 28.5 and 29.4 penalties respectively.

Japan’s Kazuma Tomoto has moved up from third to lead the CCI4*-L class with Vinci de la Vigne, Co Cork’s Sian Coleman tops the rankings in the CCI3*-L on Lady Baton Rouge while Britain’s Hannah Bate goes into Sunday’s show jumping phase of the CCI2*-L in first place with Tremanton.

In the short format classes, the leader at three-star level is Morrison on Global Daenerys, Britain’s JP Sheffield maintains his position at the top of the table in the two-star class with Hikita and England-based Australian, Kevin McNab, a regular competitor at this venue, is leading the two-star class for young horses on Vidalgo.

In show jumping, there were wins for Irish riders throughout Europe on Saturday. In Berlin, Lucinda Roche landed the one-star 1.45m speed class with Izar LB; at the three-star show in Lier, Belgium; Ger O’Neill was fastest in the 1.45m two-phase class with Castlefield Vegas; and Alex Duffy won the two-star level 1.45m Grand Prix in Samorin, Slovakia with Fantastico B.