Semi-final against Spain presents Ireland with a massive opportunity 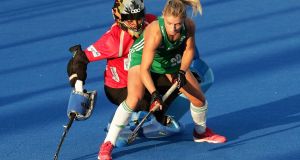 Chloe Watkins under pressure from Indian goalkeeper Savita ahead of scoring Ireland’s winning goal in the quarter-final shootout during the World Cup quarter-final at Lee Valley Hockey and Tennis Centre in London. Photograph: Kate McShane/Getty Images

The Irish hockey bandwagon rolls on. Over two days in London, the Green Army will have two shots at a medal on the World Cup stage, starting on Saturday at 2pm at London’s Lee Valley with a Sunday game for either bronze or gold.

For the players and their staff, it remains scarcely believable, far beyond the now modest pre-event target of “getting out of the group”.

Such is the way the draw has fallen, though, it now looks an easier task for Ireland to win a silver than a bronze. Indeed, in addition to every strong Irish performance, the perfect set of results elsewhere have helped to guide their path through.

Shocks have abounded, opening up Ireland’s quarter of the draw massively in the same way as the football World Cup opened up for England, leaving none of the world’s top eight standing.

Now, Ireland play the world number 11 side Spain for a place in the final, avoiding the seemingly unbeatable Dutch and a well-fancied Australia who contest the other semi.

Like Thursday’s quarter-final opponents, India, this was absolutely the opponent Ireland would want to play when shown the three options.

The Spanish have been up and down in the tournament, opening with a 6-2 hammering at the hands of Argentina before bouncing back to inflict something similar on South Africa, 7-1. They ended their group with a 3-1 defeat to Germany but bounced back to beat them in the quarter-final – having controversially beaten Belgium in a shoot-out – to set up this semi-final tie.

For Ireland, there is no opponent they know better and the bank of video analysis available from 26 previous meetings in the last five years is jaw-dropping.

Ireland have won nine and drawn three of that total and coach Graham Shaw agrees no other teams in the game know each other better. It stems from their incredibly similar backgrounds. Unlike the other sides Ireland have faced in the tournament to date, the resources gap is far smaller with Spain operating on a similar scale to Graham Shaw’s side.

The ‘Red Sticks’, however, do have a much richer history, winning the 1992 Olympic gold on home turf while they reached the last four of the 2006 World Cup – which they also hosted.

But theirs is very much the other fairy-tale story of the final four sides, as they coped with constrained resources, working out novel solutions to make things work when they cannot get everyone together full-time.

“Everyone plays club hockey, they study, have jobs,” says coach Adrian Lock, an Englishman who has been in situ with the Spanish women for over five years. “There are doctors, physios, industrial engineers, architects. They are amateur players who get some sponsorship from the national team.”

It all sounds very familiar to the Irish story.

Indeed, with no pro league in Spain, it means five of their star players have switched to Belgium, Germany and the Netherlands, similar to Ireland’s Anna O’Flanagan, Chloe Watkins and Nikki Evans taking time out from work to pursue their dream.

And Watkins, one of Thursday’s shoot-out heroes, says now that Ireland are in this position, they will be going all out for a medal.

“When you get an opportunity like this, you have to grab it with both hands. It’s what we have done all week. We have come out with smiles on our faces and enjoying the occasion but if anyone underestimates us, they would be foolish. We are going for a medal now, we are in the mix and will do the best job we can.”

Awaiting them is either a final at 4.30pm on Sunday or a bronze medal game at 2pm, either of which will provide more highly-rated opponents than Ireland have faced to date.

The Netherlands are competing on a whole other level so far and they eased past hosts England on Thursday night 2-0 with the minimum of fuss. In 14 World Cups, they have only twice missed out on a final berth, winning seven golds.

They will meet Australia in their semi-final, another thoroughbred nation with two prior golds and three silvers on their record.