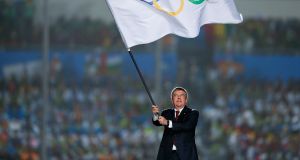 The Olympics have hit a reckoning point. With the Tokyo 2020 Games temporarily torpedoed by coronavirus amid a surging clamour among Olympic athletes that Black Lives Matter, one might think that those running the world’s biggest media and marketing event might slow their roll and recalibrate. Instead, the International Olympic Committee has rammed ahead with the same old sanctimonious bromides about not mixing politics with sport. As International Olympic Committee (IOC) president Thomas Bach touches down in Tokyo to meet with Olympic organisers, now is the perfect time to reconsider the IOC’s outdated approach.

Never has it been more obvious that the Olympics are brimming with the political. And yet, Bach recently wrote “the Olympic Games are not about politics” and that the IOC “is strictly politically neutral at all times”. With calls mounting from around the world – and across the political spectrum – to boycott the 2022 Beijing Winter Olympics because of China’s egregious human rights violations in Xinjiang, Hong Kong and Tibet, Bach argued that boycotts are futile.

To be sure, the IOC has long lagged behind when it comes to adapting with the times. Initially set up as a literal old boys’ club, it excluded women from IOC membership until 1981. After years of complaints from Olympians – many of whom were barely scraping by economically – that a rule in the Olympic Charter prohibiting sponsor shout-outs was hindering their ability to make money during the Games, the IOC finally amended its charter in 2019 to allow for it.

The IOC’s reaction to the coronavirus pandemic has been similarly sluggish. Back in March, when faced with the virus, European football, US basketball, and Formula One motor racing all slammed to a halt. But that didn’t faze Olympic powerbrokers. Then Japanese prime minister Shinzo Abe, a super-booster so dedicated to staging the Games that he cosplayed Super Mario at the closing ceremony of the Rio Olympics, quizzically insisted, “We will overcome the spread of the infection and host the Olympics without problem, as planned.”

The day after the Tokyo 2020 Games were finally postponed, the IOC president was asked why the delay took so long. Instead of suggesting that the IOC was examining athlete wellbeing from every possible angle before coming to a decision, or explaining that he was working in close consultation with the World Health Organisation, Bach admitted that he was looking to US president Donald Trump for guidance. “You have maybe seen the latest declarations from President Trump about the prospect of middle of April there being able to lift many of the restrictions.” That Bach would value Trump’s opinion as much as medical expert advice is jarring.

Olympic athletes across the world are increasingly speaking out against racism and for Black Lives Matter, whether it’s British swimmer Alice Dearing, Ghanaian skeleton racer Akwasi Frimpong, or French fencer Ysaora Thibus. But the IOC had made it clear that using their Olympic platform to express these beliefs is strictly forbidden. There has long been a rule in the Olympic Charter banning dissent: “No kind of demonstration or political, religious or racial propaganda is permitted in any Olympic sites, venues or other areas.”

Earlier this year, the IOC doubled down, issuing guidelines that explicitly prohibit “gestures of a political nature, like a hand gesture or kneeling” at the Tokyo 2020 Summer Olympics.

This curiously specific list of gestures was, in reality, an unmistakable rebuke of two US Olympic athletes – hammer thrower Gwen Berry and fencer Race Imboden – who at the 2019 Pan American Games took a stand for Black Lives Matter. Berry punched her fist into the sky as she stood on the podium “for all of the injustices that are going on in America and a president who’s making it worse” while Imboden took a knee during the official medal ceremony, animated by “racism, gun control, the mistreatment of immigrants”.

Bach may claim that by allowing such dissent “the Games will descend into a marketplace of demonstrations of all kinds”, but the direct effect is to bolster the status quo of white supremacy. Squelching athlete dissent also violates a key principle in the United Nations’ Universal Declaration of Human Rights: “Everyone has the right to freedom of opinion and expression; this right includes freedom to hold opinions without interference and to seek, receive and impart information and ideas through any media and regardless of frontiers.” IOC rules prohibiting athlete activism at the Olympics unambiguously undercut the freedom of expression.

Bach also contended that Olympic boycotts are mere folly. But this ignores how sports boycotts were a key tactic in destabilising, and ultimately overturning, apartheid in South Africa. Under pressure from countries around the globe, the IOC itself grudgingly banned South Africa from the Olympics between 1964 and 1992.

Bach’s boycott bashing also slices against a global zeitgeist demanding that the 2022 Beijing Winter Games be relocated because of the human rights situation in China. More than 160 human rights organisations support a move. British foreign secretary Dominic Raab recently suggested that a boycott was one possible retort to China’s abuse of Uighur Muslims.

In the United States, Republicans are leading the charge to relocate the Games, but China is a bipartisan target, with president-elect Joe Biden hammering China at nearly every turn. While much of this can be chalked up to political chest-pounding, the truth is that China’s actions in Xinjiang province, Hong Kong and Tibet collide clunkily with fundamental principles enshrined in the Olympic Charter.

The IOC’s reckless dependence on progressive pieties has run its course. Its claims to apoliticism crumble under scrutiny. Olympic powerbrokers do not shy away from politics – only a specific type of politics that aim for liberation. Meanwhile, regressive politics and authoritarian crackdowns are given wide latitude in Olympic circles, and all too often, the culprits slither away from accountability.

For too long the IOC has fired off diktats from behind the plate glass of its privilege. Today, as a pandemic punctures the status quo, the IOC’s pomp and privilege should offend the sensible.

Jules Boykoff is an American academic, author and a former professional and Olympic soccer player. He has written four books on the politics of the Olympics, including Power Games: A Political History of the Olympics, and is a contributor to the New York Times and Guardian.

1 Andy Farrell hands Billy Burns first Ireland start against Georgia
2 ‘God is dead’: The world’s front pages remember Diego Maradona
3 Leinster’s weekend trip to play Scarlets cancelled
4 All bets are on as America opens the gambling sluice gates and the dollars flow
5 Keith Duggan: Through the glories and the disgraces, we were all Maradona addicts
Real news has value SUBSCRIBE