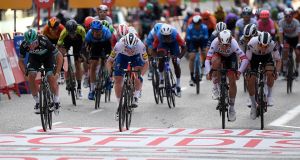 Never has the finish line of a three-week Grand Tour felt so welcome and so dear only for Sam Bennett it came a fraction of a second too soon.

Chasing another magnificent career milestone, the Irish rider was denied a triple crown of stage finales down the La Castellana in Madrid by the width of his front tyre, losing out to his young German rival Pascal Ackermann, who timed his sprint to absolute perfection. It took a photo-finish to decide; another half a metre and Bennett had it won.

In the suitably thrilling climax to the 75th Vuelta a España, Bennett looked poised to add to his victory on the Champs-Élysées seven weeks ago, winning the green jersey in the Tour de France in the process, having also won the final stage of the 2018 Giro d’Italia in Rome.

Instead, Stage 18 finishing with a five-lap circuit of the Spanish capital, that triple crown will have to wait, though Bennett will surely rue this chance: he was also second on the final stage in Madrid last year, and the setting seemed perfect – Rome, Paris and now Madrid – what for what would have also been his 50th professional career win, and a 100th Grand Tour stage for his team for Deceuninck-Quick-Step.

“Yeah, I really wanted this one,” said Bennett, who like Ackermann had no idea who had won or lost until seeing the photo finish. “Missed out last year, so there was some pressure too, there’s always pressure, but most of that comes from myself. My first time doing two Grand Tours in the same season, it’s definitely something new to me. At the start of the week I was feeling terrible but the last few days have been better.”

Indeed it came 10 days after Bennett thought he’d been celebrating that 50th career victory (which began with his Stage 5 win in the 2013 Tour of Britain) only to be relegated after winning Stage 9 for an “irregular sprint”, which was then awarded to his former Bora-Hansgrohe team mate Ackermann, who’d originally finished a close second. In truth Bennett had been getting the better of him all season, the fatigue of a second Grand Tour surely taking its toll.

So ends the last chapter in the most unpredicted and unpredictable of cycling seasons, on the second Sunday in November, only 142 of the 176 starters making it to Madrid’s main boulevard.

The race for the outright podium positions came down to Saturday’s final climb on the last mountain, where Martin simply ran out of legs and hard road, his fourth place still the best Grand Tour finish by any Irish rider in 32 years, after Seán Kelly on the Vuelta outright in 1988.

In that thrilling finale for the three positions ahead of him, Primoz Roglic just about survived a late surge from Richard Carapaz to finish Stage 17 with an advantage of just 24 seconds, the defending champion from Slovenia having lost his Tour de France lead on the penultimate stage of that race.

On the penultimate stage to the ski resort at La Covatilla, Martin was eventually distanced with 5km to go, finishing the stage in 18th position, dropping almost two minutes off of third place, nailed down by Britain’s Hugh Carthy. Fourth also improves on his previous best of sixth place in the Tour de France in 2017; he was also seventh in the 2014 Vuelta, this his fifth top-10 in Grand Tour finish in all.

“That was one of the hardest races I’ve ever done,” said Martin. “With the cold and rain and savage pace all day it was just one stage too far for me. I emptied the tank and minimised our losses.

“In the end, the three guys in front were just better, but I’m incredibly proud of what we have achieved these past three weeks. It’s been one hell of a ride and to get the best Grand Tour result of my career and a stage victory, we could not have imagined such results three weeks ago. It’s a milestone for the team, and it makes me hungry for more next year.”

In the end though there’s no arguing with the quality of the trio in front of him, Roglic (Jumbo-Visma) taken to his limit by Carapaz (Ineos Grenadiers), the rider from Ecuador and 2019 Giro winner. Martin finished up 1:56 overall down on Carthy, knowing he couldn’t have done much more, holding a third-place podium position from the opening stage, only to lose it to Carthy after the British rider won the stage finish on the Angliru last Sunday.

After 18 stages in and out of the saddle, Roglic reached Madrid with just 24 seconds to spare on Carapaz, Carthy just 47 seconds back in third - the closest finish to the Vuelta since 1984, which Eric Caritoux won by six seconds. Roll on 2021.