Ian O’Riordan: the price of each anticipated medal could be close to €10 million 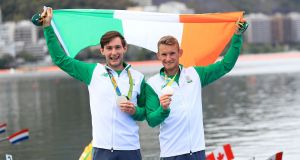 They flew KLM Airlines via Amsterdam and headed for Tokyo on nothing more than the promise of an Olympic blazer and a competitor’s medal. My dad was in one of the back seats beside Jim McCourt, and it wasn’t long into the flight before he opened a fresh pack of 20 cigarettes.

“I’m okay for the moment,” he replied.

They seemed an unlikely match; a lightweight boxer from West Belfast, an even lighter 5,000m runner from North Kerry, only they got along like old school friends. McCourt had just turned 20, a hungry kid trying to make a name for himself, who skipped and sparred until his knuckles bled and believed nothing as cheap as a 1964 cigarette was going to harm his gold medal chances in Tokyo.

“And they help me to relax,” McCourt said, puffing gently on his second of the flight. By the time they landed in Tokyo he’d finished off about 30, deftly squeezing the butts into the small ashtray between their seats.

A fellow passenger might well have looked over at McCourt smoking and confidently predicted that no way was he going to win anything, yet he did – the only member of that 25-strong Irish team to return home from those 1964 Olympics with a medal. As it turned out it wasn’t his smoking habit that cost McCourt gold, but more likely some dubious judging.

In 1964, there was zero government funding for elite sport, the only carding scheme being the ones sent from home and hand-signed Good Luck. Trace the trail and many Irish athletes typically had to pay their own way to the Olympics, including Dr Pat O’Callaghan, to Amsterdam in 1928, where he won the gold medal with his final throw; it took a church-gate collection and another heroic effort for him to defend that Olympic title in Los Angeles in 1932.

Others weren’t so fortunate, high jumper Brendan O’Reilly qualifying for Melbourne in 1956, only to discover there was no money to pay his way back from Michigan, where he was attending university.

McCourt’s bronze was also a rare thing: the first Irish Olympic medal in any sport since the four won by Irish boxers in Melbourne 1956, along with Ronnie Delany’s 1,500m gold. It wasn’t until Moscow 1980 when Hugh Russell bridged the medal winning gap again, with flyweight bronze, David Wilkins and James Wilkinson also winning silver in sailing.

Nothing delivers a shot of nostalgia better than these old Olympic journeys, especially when they’re being revisited 56 years later. Or six months to go, to be exact, and impossible as it is to fully understand how much has changed for the Irish Olympic team heading for Tokyo this July, predicting medals remains a no less fickle business.

Earlier this week, Sport Ireland announced a 2020 Government funding package of €36 million, effectively the annual pay-day for the 58 National Governing Bodies of Irish sport, excluding the bulk of funding that goes to big three – the GAA, FAI, and IRFU (who get the money under different criteria). Of this €36 million, €9.4 million will go directly into the 21 high performance programmes aimed at preparing and getting as many Irish athletes to Tokyo as possible.

Another €2.43 million went into the carding scheme for 2020, which will directly fund 116 individual athletes, 24 of which received the maximum podium amount of €40,000. On top of that there is €820,000 for the high performance operations of the Olympic Federation of Ireland (OFI) and Paralympics Ireland, plus another €975,000 for special project funding towards 2020. It’s also estimated the cost of getting the Irish team to Tokyo and back will come in at €2.5 million.

Sport Ireland have always been pretty transparent about these figures, also doing us the favour of listing the full Tokyo-cycle funding, as in the four years since Rio 2016, which certainly makes for the most interesting reading; between the high performance funding (€31.4 million), high performance operations (€3.02 million), the carding scheme (€8.84 million) and the special project funding (€3.43 million), the total Tokyo-cycle funding comes in at €46.69 million.

For the four-year Rio-cycle in 2016, the total funding was €38.7 million, and in the four-year London-cycle for 2012, it was just under €30 million, so there’s denying Sport Ireland’s claim that this will be the best-funded if not best prepared Irish team in Olympic history.

Now back to the medal predictions.

“Our target is to get three to five medals, that’s the expectation,” said John Treacy, chief executive of Sport Ireland, who perhaps deliberately avoided the word “prediction”, knowing full well how fickle that can be. Not many people, except perhaps himself, predicted Treacy would win a silver medal in the marathon at the 1984 Los Angeles Olympics.

For Rio, four years ago, the two most obvious medal predictions were Michael Conlan and Katie Taylor, one definitely denied by some dubious judging, with hopes too for fellow boxer Michael O’Reilly before he was suspended for a doping.

In the end, the silver medals won by sailor Annalise Murphy and rowers Paul and Gary O’Donovan represented Ireland’s lowest summer medal haul since Athens 2004, where the sole gold medal won by showjumper Cian O’Connor had to be handed back after his horse Waterford Crystal tested positive for a banned substance.

In crude and cynically financial terms, those two Rio medals worked out at about €15 million each – at least if not including the 11 Irish medals also won at the Rio Paralympics, plus all the other Irish medals won in the previous three years. If Treacy’s expectation for Tokyo is in any way accurate, the price put on the investment for each medal could be somewhere over or under €10 million (or a little less, should Rory McIlroy or Shane Lowry win a medal in golf, as they’re dealing with cards of a whole different sort), and again not including medals won at the Paralympics.

This perhaps being the same cynical view of those who know the price of everything and the value of nothing, that €15 million, incidentally, the same amount now needed by the National Paediatric Hospital Development Board to defend itself against the high level of ongoing claims being made by contractors in the building of the national children’s hospital, which is set to come in at €1.7 billion, possibly more.

Set against those figures, and given the immeasurable benefits of sport, or just seeing what the O’Donovan brothers have done for the sport of rowing around Skibbereen alone, the winning of any Olympic medal could be considered priceless and invaluable. Only six months to know.

Leaving Cert prep forces Beibhinn Parsons out of rest of Six Nations 15:01
Kieren Westwood: ‘I feel obliged to clear my name and defend myself’ 14:01
All in the Game: No Moore medals for Steven Gerrard 12:34
Tokyo marathon cancel next month’s mass participation race 13:20
Added Time: What can be done about worrying trends at schools rugby matches? 11:48
Here is your handy guide to sport on television this week