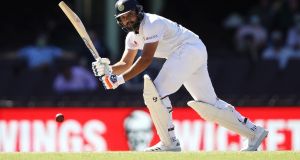 A Test match that was already hurtling along on the first day was all over on the second when, shortly after the dinner break, Rohit Sharma twinkle-toed down the pitch and launched Joe Root for an almighty six. As it soared through the night sky like a pink-tailed comet, the roars reverberated around Narendra Modi stadium. India had claimed a crushing 10-wicket victory over England and taken a 2-1 series lead going into next week’s final instalment. Avoid defeat – who would bet against them winning right now? – and they will meet New Zealand the World Test Championship final this June.

We were told that the seamers were licking their lips in anticipation of getting their hands on pink SG ball before this much-anticipated day-night third Test but it was a veritable feast for spinners, both specialist and part-time. They claimed 28 of the 30 dismissals across the five-and-a-bit sessions of madcap action, including 11 for Axar Patel, a 400th in Test cricket for the irrepressible Ravichandran Ashwin and what was a surprise maiden five-wicket haul for Root.

The ease by which Virat Kohli’s side completed their chase of 49 under lights, needing just 46 balls to get there, may well be enough for some to claim there was no issue with the surface prepared here. The pressure was well and truly off by this stage, however, with a day of some 17 wickets – ergo collapses from both sides – having left the paltry target a mere formality.

At 140.2 overs, this was the shortest completed Test match since England beat West Indies in Barbados back in 1935 and it was, it must be said, utterly gripping drama. Every ball was an event, while the value of each run was magnified well beyond the norm. Whether these two things add up to a satisfactory match will sit in the eye of the beholder, a debate which will likely rumble on – and probably lose all sense when partisanship inevitably takes hold.

Up until the chase it had, truth be told, become something of a lottery for the batsmen. India’s overnight 99 for three turned into 145 all out thanks to figures of five for eight from Root’s part-time off-breaks, before England, rolled for 112 on day one, were skittled for a mere 81 in the afternoon. The generous appraisal would be to say this was a day four pitch, just two days early.

Certainly Patel was exemplary throughout and never more so than when he took the new ball and extinguished the growing flames of English optimism in the space of three deliveries. Zak Crawley was bowled neck and crop, so too Jonny Bairstow for a pair. In between an lbw was overturned, denying the left-armer spinner a hat-trick rolled over from the first innings.

From none for two in the first over, with a first innings deficit of 33, England struggled to muster up much resistance thereafter. Root hustled 19 runs, including a reprieve from the third umpire that had angered him the day before, while Ben Stokes top-scored with 25. But when the pair were winkled out by Patel and Ashwin, and Ollie Pope had his off-stump knocked over by the latter for the second time in the match, the lengthy tail once again fizzled out.

On the BCCI-approved television commentary the chaos that unfolded was put down to poor batsmanship, a line repeated by Kohli at the close when appraising both teams. With England having now strung together a run of five successive innings south of 200, and now their lowest total against India, few could argue it didn’t contribute their demise here.

Root’s players have had their collective confidence shattered by the turning ball over the past fortnight, to the point where the one that goes straight has become the most dangerous delivery. The upshot of this arm-ball-geddon was a match aggregate of 193 for 20 – England’s second lowest since 1905 – and there will be regret about their performance on day one after reaching 74 for two.

The arm-ball was certainly Patel’s most potent ball, so too Jack Leach who claimed four for 54 and kickstarted the day by trapping both Ajinya Rahane and Rohit Sharma lbw. Root had a theory about this afterwards, claiming the lacquer on the pink SG ball saw it skid on and thus beat batsmen for pace on occasion.

Root picking up five wickets, including Rishabh Pant first ball and a beauty to castle Washington Sundar, made him the first England captain to do so since Bob Willis in 1983. It also confirmed what was suspected from the outset: selecting four seamers on this surface was a duff call and something the late Willis himself would have railed against when delivering his verdict.

Chiefly this was about the decline of England’s batting on tour, however, as well as the prowess of India’s spinners. When Ashwin pinned Jofra Archer lbw, it was his 400th Test victim in 77 Tests. Only Muttiah Muralithran was faster to the landmark, needing 72 matches, and if there were any doubts about Ashwin’s place in the pantheon of great spinners, these have surely disappeared.

Both he and Patel, who now has three five-wicket hauls in his first two appearances, will once again be the challenge come next week’s fourth Test on the same ground. By dint of this quickfire defeat, England’s batsmen at least have some additional time to draw up fresh battle plans. Whether they can, however, very much remains to be seen. - Guardian