India rally after another day of Australian domination 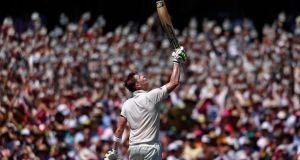 Australia’s captain Steven Smith celebrates reaching his century during the second day’s play in the fourth test against India at the SCG (Photograph: REUTERS/David Gray)

Australia’s domination of India at the SCG reached unprecedented levels before the visitors rallied to be 71-1 at stumps on day two of the fourth Test.

Steve Smith declared at 572-7 shortly after tea on Wednesday, the skipper’s sparkling 117 the highlight of a top order that touched up the tourists’ trundlers in record fashion. Never before has Australia’s top six all passed 50 in the same Test innings.

India showed more fight with the bat in 25 overs than they managed with the ball, with Rohit Sharma heaving two sixes off the bowling of Nathan Lyon.

Sharma, recalled to the side and batting at first drop in a reshuffled order, steadied his side after Murali Vijay was dismissed in the opening over. Mitchell Starc gave Vijay a vocal send-off after he was caught behind for a duck.

Mohammed Shami grabbed a five-wicket haul, but the paceman was one of four bowlers to go for more than 100 runs. Offspinner Ravichandran Ashwin toiled astutely in 47 overs and snaffled a catch in the deep to dismiss Shane Watson for 81 in the morning session.

India otherwise bowled meekly in their final clash before World Cup preparations begin in earnest. The status quo of misfields, miserable bowling and a lifeless pitch continued when Australia resumed at 2-348 on day two.

It remains to be seen where the zenith of Smith’s career-best form is, but the SCG was the scene of his fourth century in the four-Test series. Many records have tumbled over the past month and Smith is well placed to break further new ground in Sydney.

Smith needs only 18 more runs to surpass Sir Donald Bradman’s tally of 715 as the best effort by an Australian in a Test series against India. The 25-year-old made it look absurdly easy - shuffling down the pitch, clipping balls off his pads and striking sweetly timed cover drives.

He looked to the skies in memory of Phillip Hughes upon reaching triple figures on Wednesday, having dished out the appropriate treatment to a full toss from Umesh Yadav.

Watson trudged off with his head down after picking out Ashwin in the deep, reducing Australia to 3-400.

Not since Australia were 3-489 against England at The Oval in 2001 had the side had so many runs at the fall of the third wicket in a Test innings.

Shaun Marsh and Joe Burns had some nervous moments late in the morning session, with Vijay putting down a chance at gully when Marsh was on nine. But the raw pair soon settled in a 114-run stand, Burns posting his maiden half-century and Marsh scoring 73.

Australia tallied more than 500 runs in their first innings of every Test in the four-match series. The most recent time the side managed the feat in four consecutive Tests came against the West Indies in 1968-69.