Palatable phrasings and process before progress for Cricket Australia 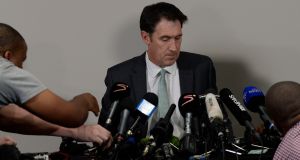 It was as Cricket Australia as Cricket Australia gets. Process before progress, careful phrasing before straight answers. The chief executive officer, James Sutherland, fronted up on Tuesday evening South African time after a day of anticipation about how Australia’s ball-tampering scandal would be resolved, then postponed resolving it by 24 hours, saying the investigation he had commissioned was incomplete.

Some concrete information of significance did come out. Preliminary findings implicated only the Australia captain, Steve Smith, his deputy David Warner and the junior Cameron Bancroft. The three would be sent home and replaced by Matthew Renshaw, Joe Burns and Glenn Maxwell. Tim Paine would captain.

The rest of the Cape Town XI were said not to be involved but Sutherland would not be drawn on how they felt towards the team-mates who had dragged their names through the mud. He said: “No other players or support staff had prior knowledge and this includes Darren Lehmann, who despite inaccurate media reports has not resigned from his position. He will continue to coach the Australian men’s team under his current contract.”

As for what actually transpired, how the tampering episode came about and what the sanctions would be, Sutherland ducked out of disclosing detail by saying that the investigation had to run its course. In the absence of specifics his comments rested on the foundation of generality.

“I understand and share the anger and the disappointment of the Australian cricket family” was one early effort, unable to break from the PR lingo of website log-ins and marketing campaigns. The CA chief executive also deflected questions about whether his players had cheated on the field.

Just as Smith and Bancroft had circuitously referred to “looking for an advantage” or “altering the ball condition” in their press conference after being caught on Saturday, Sutherland looked for more palatable phrasings to avoid having stronger words attributed to him in headlines.

“This is not in the laws of the game, it’s not in the spirit of the game” was his repeated phrase, like his players failing to realise that a cricketing public may more readily forgive offenders who are blunt about the nature of their sins.

Watching the tall CEO hunched over an undersized table, his black suit giving the impression of a crow landing for a rest, his voice a bit husky and his face creased with exhaustion, it struck home again how gravely this was being treated where other countries have shrugged off ball-tampering episodes as minor disciplinary infractions or even causes to rally behind the player involved.

Why does this matter so much? Why has it been so big? To answer that, it was a rare case where Sutherland said it best. “It’s an issue of great proportion because of the standing of cricket in the eyes of the Australian public, and I think that response is not particularly surprising.

“It’s beholden on everyone who plays the game to uphold the spirit of cricket. The responsibilities of the captain are higher than anyone. Certainly that’s something that’s really important to the game of cricket and in some ways separates it from other sports, and that’s part of what hurts right now.”

To that end it is the fate of Lehmann that will cause most discussion, having been widely implicated in the decline of Australia’s team culture that led to last Saturday’s episode. The head coach took over just before the 2013 Ashes series with a reputation as a laid-back bloke whose everyday approach helped his players to relax in the tense world of professional sport. Over time that reputation has shifted to being the figure who at worst encourages or at least permits a boorish and aggressive streak in his teams.

Certainly some of Australia’s players – from the “broken fucking arm” of Brisbane in 2013 to clapping in the face of dismissed batsmen in the 2015 World Cup final – have taken up that permission with enthusiasm. Brad Haddin was the wicketkeeper giving the send-offs in that World Cup final and is now part of the coaching staff.

When Sutherland promised to review “the conduct and culture of our teams”, it seems antithetical that the coaches have already been given a pass.

It was equally unsatisfactory that a fairly simple investigation had not been wrapped up. The lead-up had been awful. The lobby of the team hotel during the preceding afternoon was knotted like an anxious stomach. Team staff, friends, journalists, drifted through with looks of varying grimness on their faces.

By kicking the problem down the road, CA has only ensured it will dominate news for another day. And when those 24 hours are up we will come back and go through the whole process again.