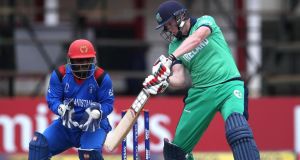 Porterfield’s side will miss out on the tournament for the first time since 2003 after a five-wicket defeat to Afghanistan in their winner-takes-all qualifier in Harare on Friday.

The ICC cut the number of teams competing from 14 at the last tournament to just 10 for next summer’s event in England and Wales.

The top eight ranked sides were assured of their place and will be joined in a round-robin group stage by Afghanistan and two-times winners West Indies, who came through a hard-fought qualifying campaign.

Cricket Scotland chief executive Malcolm Cannon on Thursday questioned why the ICC is cutting down its World Cup while other global sports are expanding theirs, and 32-year-old Porterfield added his criticism after Ireland lost with five balls to spare.

The Ireland skipper told a post-match press conference, which was posted on the ICC Media’s Twitter page: “It’s been a fantastic tournament [but] how there’s only two teams going to a competition that’s played every 208 weeks and you’ve got a six-week competition, to just play it so two or three big teams can play nine games on TV so the ICC can cash in with a big cheque, and a lot of teams are leaving here with nothing in their pocket.

“What have they got to look forward to now for the next few years? It’s going to be so hard for them.

“The big cheque they’re getting [from the World Cup] has to be pushed back down through.

“All I hear is how good this competition has been, how everyone has beaten everyone, it’s gone round in a circle.

“It has to be put back into the game because if countries don’t have a World Cup to look forward to or the possibility of getting to the World Cup . . . if they actually give that carrot, dangle it in front of countries, surely cricket is going to get better in those countries and actually expand.

“I’m not just saying that because we didn’t get there but I feel sorry for a lot of countries that are leaving here that don’t know what’s going to happen next week.”

Porterfield’s side do have the luxury of knowing their immediate future as they prepare for their first Test match.

Ireland, along with Afghanistan, were given Test status last year and play their first game against Pakistan in May in Malahide.

Scotland, on the other hand, only have three scheduled games this summer – a one-day international against England and two T20s against Pakistan – after their narrow defeat to West Indies in their rain-affected final qualifier.

Porterfield said: “To some extent we’re lucky. We’ve managed to get where we are.

“I feel sorry for Scotland how it ended for them. But they go back now and they’ve probably got three games of cricket this summer. For them to progress I think it’s going to be harder.

“I feel sorry for a lot of other teams that are leaving here. Obviously ourselves and Afghanistan got elevated, which we’re grateful for, but we need to keep getting funding in to improve facilities, get those extra fixtures.

“We leave here, yes we’re gutted now, but in a couple of weeks’ time we’ve got to regroup and build up towards the Test match and we’ve got a few other fixtures this summer.”

Afghanistan – coached by former Ireland boss Phil Simmons and with former Ireland all-rounder John Mooney as their fielding coach – completed an incredible comeback in the tournament after losing their opening three games, by winning their last four, including a three-wicket over fellow qualifiers West Indies.

William Porterfield won the toss and elected to bat first, and he and Paul Stirling made a watchful start on a wearing pitch, finding the boundary rope just five times in a 53-run opening stand.

Porterfield departed for 20 from 45 balls after flicking off-spinner Mohammad Nabi to midwicket while Andrew Balbirnie contributed 11 from 34 deliveries before nicking behind off Afghanistan’s star leg-break bowler Rashid Khan.

Stirling brought up his 13th ODI fifty as he and Niall O’Brien upped the tempo, but the former was run out for 55 after a mix-up between the wickets.

O’Brien was unable to carry on the momentum after driving to short extra cover off Dawlat Zadran for 36 as Ireland stuttered to 130 for four in the 36th over.

Kevin O’Brien contributed 41 from 37 balls with three fours and a six to lift Ireland towards a competitive total before being bowled by Rashid, who finished as the pick of Afghanistan’s bowlers with three for 40.

The daring Mohammad Shahzad led Afghanistan’s reply, taking charge of an 86-run opening partnership alongside Gulbadin Naib (45) with a rash of boundaries.

He made 54 from 50 deliveries to seemingly leave Afghanistan in pole position although his dismissal – after holing out to long-on off Simi Singh – tilted the balance back in Ireland’s favour.

Spinners Simi and Andy McBrine were able to stifle the run-rate, while the former collected the wickets of Rahmat Shah and the dangerous Nabi as Afghanistan lurched from 113 for one just after the midway point to 151 for four with 10 overs remaining.

At the end of the 44th over, Afghanistan were left needing more than a run a ball but captain Asghar Stanikzai (39 not out) eased the pressure on his side, clubbing four then six over long-on off successive Barry McCarthy deliveries.

Najibullah Zadran (17 not out) also cleared the ropes to put Afghanistan within touching distance before Stanikzai completed the job in the final over after a thick inside edge off McCarthy ran away to the boundary for four.

Afghanistan won by 5 wickets and qualify for the World Cup.