How much will Conor McGregor absence hurt UFC 200? 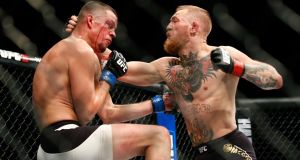 Conor McGregor’s rematch with Nate Diaz could be rescheduled for a later UFC card. Photograph: AP

We were told a rematch would headline UFC 200 on July 9th in Las Vegas. Now we know which one.

When Conor McGregor feigned retirement and balked at a three-city press tour for his second fight against Nate Diaz, the UFC did what it told him it would do. It treated McGregor, the “Notorious” one, like any ordinary fighter and cast him to the bench. On Good Morning America on Wednesday, UFC president Dana White attempted to move on.

In place of Diaz-McGregor 2, which would have generated massive public interest, the card’s main event will feature Daniel Cormier defending the UFC light heavyweight title against the man it really belongs to, Jon Jones.

The Jones-Cormier rematch instantly loses some appeal, of course, because it’s impossible to forget how easily Jones outpointed his rival when they fought in 2015. Despite that, it continues to represent mixed martial arts with all the trappings of a major championship fight in a division that has long produced sellable stars. That is the kind of bout the UFC should want atop an event slated to earn huge media attention.

Jones’s fighting skills – and the animosity between him and Cormier – gives the fight some appeal, but there’s no overwhelming demand for the contest. Not like Nate and Conor. In the aftermath of Jones’ win in January 2015, few people lobbied for an immediate rematch since the gap between Jones and Cormier looked so wide.

Offering constant reminders that Cormier is an inferior fighter, Jones hasn’t let the current “champion” off easy in the media. Any reason to believe Cormier has a better chance at beating Jones now centers on his improvement and success against Anthony Johnson and Alexander Gustafsson.

The pair nearly had the chance to sort this out last weekend at UFC 197. Instead, following 15 self-inflicted months off during the prime of his career, Jones returned to the cage by winning a decision from the slow lane against Ovince Saint Preux, who accepted the difficult task of replacing an injured Cormier on three weeks’ notice.

Jones faced unfair criticism about his performance against OSP. But that ignores the reality that he wasn’t hit, he was rusty, he broke his opponent’s arm, and he displayed his big smile on Good Morning America after being announced as part of the UFC 200 main event.

“I fought really smart,” Jones said during an a press conference at Madison Square Garden this week. “Now I’m here today with no injuries ready to turn around and fight for you guys at UFC 200. That was a win in every way.

“I did a mature move. I fought really smooth. Fifteen months off and I was punched twice. You guys will see a real can of whoop-ass when I fight DC.”

By repositioning the lineup after McGregor hit pause on a rematch he begged for, Zuffa, UFC’s parent company, countered with a showcase of its nimble roster’s vast quality and depth. The magnetic McGregor and Diaz appear unlikely to make the date now (even as a co-main), yet UFC 200 nonetheless presents itself among combat sports premiere events of the year.

Either way, it seems Zuffa wins. (This is presuming their cards remain intact, and that’s never a sure thing.)

Without the strong Diaz-McGregor hook, however, casual MMA watchers, who delivered 1.5m pay-per-view buys for the contest in March, are left sifting through the rubble of a blown-up spectacle. Zuffa could lose millions of dollars by keeping McGregor and his Irish horde from descending on Las Vegas. But then again, the promoter may have gotten away lucky.

UFC 200, a huge event, will do very well, and Zuffa is positioned to sell McGregor’s attempt at vengeance against Diaz at a later date. White said if he had his way UFC 201, 202 or 203 would host a McGregor fight, giving an automatic boost to an event that didn’t have a catchy round number on the poster.

McGregor creates his own gravity, and fans are well within their rights to be upset about missing him on July 9th. The UFC promoted something epic and a rematch with Diaz would have qualified.

When Diaz was announced as McGregor’s opponent in March for UFC 196, their hastily arranged press conference pulled over 360,000 views on YouTube. Wednesday’s UFC 200 press conference with Jones and Cormier at Madison Square Garden registered just over 33,000.

It’s too soon to know whether skipping media duties in Iceland, as other champions and top-flight competitors took the time to travel to Las Vegas last week for press obligations, was smart or rash on McGregor’s part.

UFC 200 and Zuffa are already steaming on without McGregor, and much remains in doubt about his status, after moves that seem as much a tantrum as an act of courage. The churning UFC business can thrash like a treacherous sea. As proven by history, navigating through them safely is difficult, no matter who you are.