Hockey will benefit from funding but process must be clearer

What formula other than the flapping hand of minister Ross was used to divide money? 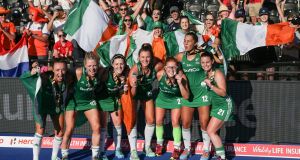 On the face of it the additional €500,000 for Hockey Ireland on top of the 2018 allocation is a winner for the sport and particularly the women’s national team.

Although it has probably been forgotten, the bump up towards the top of the funding food chain arrives not only after the women’s historic World Cup final but on the back of the men’s team winning a first ever European Championship medal three years ago and a first ever qualification for an Olympic Games two years ago in Rio.

As any sport would, Hockey Ireland reacted positively to their chunk of €1.75 million of tax payers’ money grandiosely promised.

“We are very grateful for the continued support of Sport Ireland in providing funding, facilities and services that allow our players to play at the highest level of our sport. This is fantastic news helping Hockey to progress towards Olympic Qualification and a good result in Tokyo. ”

Prior to yesterday, hockey was well down the pecking order in terms of funding. It took 19 women to get to the World Cup final and over 30 women to get the team to London before catapulting into the public domain for the first time in the sport’s history.

Hockey Ireland is now running two programmes for world class male and female athletes for upwards of 60 people. For that reason Emily Beatty was able and prepared to fly over to London the day before the World Cup final to replace the injured Megan Frazer and step into the team.

Prior to the additional €500,000 hockey was awarded yesterday the sport received €815,000 for 2018 across all three funding platforms, core grants, high performance and women in sport.

Although hockey also drew a once off €60,000 for the women’s World Cup in London and the men’s World Cup, which takes place in India later this year, players are excluded from the fourth platform, the carding scheme, which funds athletes directly.

Minister for Sport Shane Ross pointed out at his car crash announcement with the women’s team on their return that “hockey will enjoy a significant share.” Actually that turned out to be true.

But how the money was directed towards hockey and other sports and why it was directed there remains somewhat mysterious, as does the arbitrary way in which ‘extra’ money appears and seems to be allocated by politicians and distributed by Sport Ireland when it should be the other way around, distributed by politicians and allocated by Sport Ireland.

One of the roles and functions of Sport Ireland was to remove the remnants of old school interference and halt the practice of cherry-picking sports that catch the public eye or hold the potential to reflect well on politicians. Money becomes confetti.

Ireland’s history of funding prior to Sport Ireland was all about ministers gifting their own constituencies. Probity and responsible distribution of funds was questioned.

The week gone has shown that, far from it being a sleight of hand, it has become a face-off with good taste performed with bravado in front of the cameras.

Hockey deserved its €500,000 but what formula other than the flapping hand of the minister was used to give the sport that amount of money or give Swim Ireland €75,000 and Athletics Ireland €50,000? Was Thomas Barr’s bronze in the European Championship 400m hurdles less worthy than Shane Ryan’s backstroke bronze in the pool? And was that extra €75,000 to Gymnastics Ireland for a gold medal in the pommel from Rhys McClenaghan about its worth?

Rowing received an additional €40,000 maybe for the O’Donovan brothers, consistent benchmarks of excellence, pulling like dogs.

Add the veneer of a politician successfully sucking all the oxygen from an otherwise innocent homecoming for the Irish women’s hockey team and the 1980s rise up in front of our eyes. It needs to be called out.