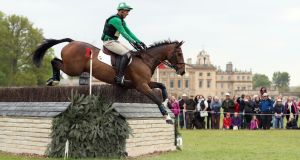 Saturday’s cross-country action had a major influence on the results with the leader after dressage, Australia’s Chris Burton, dropping down the order, as did Jonty Evans who had been the best-placed Irish rider following the flat work phase. Second after dressage, Germany’s Ingrid Klimke now tops the leaderboard with Horseware Hale Bob having added just 3.2 cross-country time penalties to her first phase score of 36.4.

Eighty-one combinations started over the 30-fence track designed by Britain’s Eric Winter. Of these, 49 finished and 32 went clear, two doing so within the time allowed of 11m 34. These were Germany’s Michael Jung, who improved from ninth to second with La Biosthetique Sam as he remained on his dressage score of 40, and New Zealander Tim Price who jumped up 30 places into fourth with Xavier Faer (48.2).

Last out on the course, New Zealand’s Andrew Nicholson and Nereo improved from equal fifth to third when 2.4 time penalties brought their two-phase total up to 40.4. His compatriot Mark Todd has two horses inside the top 10, NZB Campino (50.4) in fifth and Leonidas II (58.1) in ninth, just ahead of Japan’s Yoshiaki Oiwa who is on a score of 58.2 with the Irish Sport Horse gelding The Duke Of Cavan, a nine-year-old by Courage II.

A trio of British riders occupied sixth to ninth place overnight, headed by Rosaline Canter who made her Badminton debut last year but withdrew after dressage. Riding the same horse, Allstar B, she was on a two-phase total of 54.5, just ahead of Oliver Townend with the ISH gelding ODT Ghareeb (56.2), a 13-year-old by Ghareeb, and Alexander Bragg with Zagreb (57). (The last-named horse was one of two withdrawn at Sunday morning’s final inspection).

A part-time maths teacher, Clare Abbott moved up from equal 51st to 11th having picked up just 8.4 time penalties with the McKay family’s home-bred Euro Prince (60.1), a 14-year-old chestnut gelding on which she competed at last summer’s Olympic Games in Rio de Janeiro. Also based in Co Down, Westmeath-born Joseph Murphy jumped up from 75th to 18th with Sportsfield Othello (68).

Disappointingly for Jonty Evans, Cooley Rorkes Drift, on which he finish ninth in Rio de Janeiro, picked up 20 jumping penalties for a run-out at the second of the Jules Corners at 21 and, with the addition of 21.2 time penalties, has dropped down to 25th. “Sport’s all about confidence and I’m going to try and take some confidence from it,” said the Gloucestershire-based rider who had set a national record in dressage at four-star level on Friday of 37.2. “We made one little mistake, which was my fault, but we’re going home to reboot and aim for the Europeans.”

Co Galway-born Cathal Daniels (20), the youngest rider in the competition, had a very mixed two days as he made his Badminton debut. On Friday his mount, the diminutive mare Rioghan Rua, on which he won medals at underage level, froze in her dressage test and the combination was left propping up the leaderboard on a score of 84.6. However, Margaret Kinsella’s home-bred Jack Of Diamonds 10-year-old put in a superb round of jumping on Saturday and, with the addition of just six time penalties, Daniels is now lying 33rd.

Most of the remaining Irish combinations are due to tackle Sunday’s cross-country phase but sadly not Co Kildare’s Camilla Speirs and her wonderful Connemara/thoroughbred cross Portersize Just A Jiff who retired at fence 15, the Hildon Water Pond, having already picked up 20 jumping penalties at the Outlander Bank. The combination who were ninth here last year, were travelling reserves at the Olympics and ended the season with a sixth place finish at Pau which, like Badminton, is one of just six four-star events held worldwide each year.

The first session of show jumping is due to start at 11.30am with the second, for the top 20 combinations, set for 2.45pm.

1 Questions raised over Ireland v Italy fixture due to coronavirus
2 Six Nations: No place to hide for Ireland’s misfiring captain
3 Panorama show Mo Farah changed account to anti-doping investigators
4 Eddie Jones’s comments have already provided Irish team-talk for 2021
5 All in the Game: how Firmino’s agent made him faster . . . on his laptop
Real news has value SUBSCRIBE