Meet ‘the executioner’ trying to save world athletics 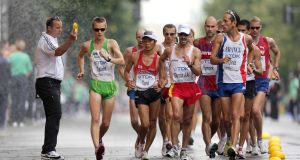 The executioner’s face is always well hidden. Although on Wednesday, the New York Times carried a picture of Pierce O’Callaghan over the caption – written in bold capital letters – THE EXECUTIONER.

O’Callaghan didn’t know whether to laugh or cry, so he laughed. He’d described his proposal to “retire” – not “rewrite”! – the current list of world records as “a necessary evil”, and the same article then quoted a number of those record holders, past and present, who let out the roar of a wave that could drown the whole world.

“I am more than angry,” said Mike Powell, the American long jumper whose world record of 8.95m has stood since 1991. “I feel betrayed by the sport I helped promote for more than 30 years.”

“The plan lumps us all in with the cheats,” said Britain’s Steve Cram, who in 1985 set world records for the 1,500m, mile and 2,000m within 19 days. “It’s not our fault that over the years our sport did not police itself properly. It’s the easy route out and a PR exercise.”

“You can never erase history,” said Cram’s British team-mate Colin Jackson, whose 12.91 for the 110m hurdles still stands as the European record. “It’s really quite offensive when I’ve put so much time and effort into my career.”

It felt as if he’d proposed we put guns and sharp swords in the hands of young children, although there’s a good reason why O’Callaghan was able to laugh all this off. Indeed in the 16 years I’ve known him, he’s been trying to keep athletics alive. The only thing he’s ever executed in his life is either a race tactic or a business plan, and if anyone feels angry or betrayed by the sport that I know he cares about then it’s him.

He won 16 national titles over a variety of race walking distances – following in the footsteps of his father, Bernie – and would have competed in the Sydney Olympics had injury not stood in his way. He’s also a realist as much as a romantic. There was a night at the World Championships in Edmonton, back in 2001, when we sat in a bar with Mark Carroll and Rob Heffernan, and it wasn’t long until the subject of doping came up. About five minutes, actually.

What we all agreed on was that there were lots of times and records that we couldn’t believe in anymore, and that conversation has been replicated at every major championships since.

Now more than ever something had to change – and this is what the president of European Athletics, Svein Arne Hansen, had in mind back in January when he appointed O’Callaghan to chair the review group of all existing records in their books, both indoors and outdoors, in order to weed out those not considered “100 per cent believable and credible”.

What O’Callaghan promptly realised was that many of those European records are also world records, so it became a global exercise. Only in 1999, when the German athletics federation proposed a “clean slate” of world records to go with new millennium, the IAAF rejected it 192-1. When they proposed something similar in 2012 to coincide with the IAAF centenary, it didn’t even make it as far as a vote.

O’Callaghan’s proposal to “retire” – again, not “rewrite”! – the current list of records was unanimously approved by the European Athletics Council on Sunday, the essential component of which includes stricter anti-doping measures for future records to be approved, while also allowing for the removal of that record at any point should that athlete fail a doping test. It will now go before the IAAF for global approval on the eve of the World Championships in London in August – the operations of which, by the way, O’Callaghan has been heading up for the past year.

He has, in other words, friends in the right places, including IAAF president Seb Coe, who in 1979 set world records for the 800m, 1,500m and mile within 41 days. Coe was one of the first people to offer his roar of approval, and while there are some barriers still in the way there is the sense this proposal has already come too far to fail.

O’Callaghan has impressed other people that matter too: after an interview on Tuesday with BBC sports editor Dan Roan – a man known to execute plenty of his subjects – Roan turned around to say he was pleasantly surprised at the IAAF’s stance on this, and also the way they continued to stand up against Russia. Given the IAAF’s recent constitutional reform (which definitely wasn’t a PR exercise), might the sport actually revive itself?

The McLaren Report into Russian doping cost the IAAF $1.5 million (€1.4m); O’Callaghan’s budget was a big, fat zero. Not one cent was given or asked. Like anyone who cares about the sport, much of O’Callaghan’s work is actually voluntary, such as this weekend, when back home with his family in Galway, he gets to help out at the school sports of his young daughters.

“We can bury our hands in the sand, or we can move on,” he told me. “This is not about rewriting history. It’s about writing a brighter future for everyone involved in the sport. A lot of athletes who spoke out this week against it are the same athletes who keep saying more needs to be done to restore the credibility. We’ve flogged this issue to death. Something has to be done.”

Which is why the executioner might yet help save the sport – and not the PR exercise of a team of athletes from countries with the poorest anti-doping programmes bending and breaking some of the rules in an effort to run a sub two-hour marathon. (Spoiler alert: they didn’t break it!)