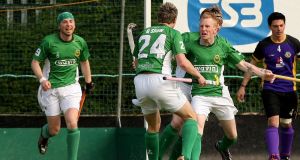 David Keogh celebrates with his team mates after scoring against Monkstown on Saturday. Photograph: James Crombie/Inpho.

Glenanne produced the shock of the men’s EY Hockey League season to date as they stunned Monkstown 3-2 at the Merrion Fleet Arena, ending the reigning champions unbeaten run.

It owed much to the Tallaght side’s efficiency from set pieces as Shannon Boucher produced a perfect return of two goals from two penalty corners, adding to David Keogh’s penalty stroke to overturn the sky blues.

Nonetheless, they did take the lead into the second half as Andrew Ward picked up the pieces from a Richard Sykes cross.

Glenanne hung tough, though, and were back on terms when Sam O’Connor was upended by David Fitzgerald. Keogh scored from ensuing stroke for 1-1.

Boucher then flung home twice in quick succession in the fourth quarter from Glenanne’s only penalty corners to put them on the cusp of victory with Lee Cole’s effort coming too late to affect the outcome.

It opened the door for Lisnagarvey to go top for the first time as they proved too strong for Annadale in their derby tie in Hillsborough, winning 3-1.

Sean Murray continued his excellent form with a fifth goal in four games from midfield inside the first minute before Timmy Cockram made sure of the result with a pair of corner goals.

Three Rock Rovers’ impressive start to the season continued with a 4-3 win over Cork C of I despite John Jermyn’s third hat trick of the season.

Jermyn’s second had nudged C of I in front 2-1 with 16 minutes to go before all hell broke loose with Peter Blakeney striking twice.

Jermyn tied the game up at 3-3 but Fred Morris, though, won it late just a minute later to move Rovers to fourth place.

Pembroke and Railway Union tied 1-1 while Banbridge beat Cookstown 1-0 with Eugene Magee scoring the winner with three minutes to go.