Geraint Thomas on the verge of Tour de France victory 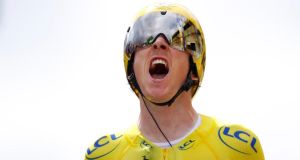 Geraint Thomas celebrates as he crosses the line in the 20th stage of the Tour de France. Photograph: Kim Ludbrook/EPA

Geraint Thomas is set to win Tour de France after protecting his yellow jersey on Saturday’s stage 20 time trial from Saint-Pee-sur-Nivelle to Espelette.

Thomas will become the third British winner of the race, joining Sir Bradley Wiggins and Chris Froome, with the trio winning six of the last seven editions, all in Team Sky colours.

His closest rival at the start of the day, Tom Dumoulin, won the stage by one second from Chris Froome, but with Thomas only 14 seconds back the Welshman had more than enough in hand.

Meanwhile Dan Martin shipped more than two minutes in the time trial, but the UAE Team Emirates rider — named the most combative in the Tour overall — did enough to protect his top 10 place as he is set to finish eighth overall.

Thomas will carry a lead of one minute and 51 seconds into Sunday’s traditional procession into Paris before the sprinters fight it out for glory on the Champs-Elysees.

Thomas was embraced by his wife Sara and Team Sky principal Sir Dave Brailsford at the finish, and appeared to wipe away a tear.

Froome, who came here looking for a record-equalling fifth Tour title and seeking a rare Giro-Tour double, had to settle for third place, taking back the final podium spot from LottoNL-Jumbo’s Primoz Roglic with his second place on the day.

There was brief confusion when the timing splits appeared to show Froome had beaten Dumoulin by one second to take the stage, though it was soon corrected.

“That’s crazy,” Dumoulin said. “I didn’t know anything about split times and I still thought Froome was one second ahead of me when I crossed the line. Wow.”

Thomas emulates Wiggins in converting himself from an Olympic team pursuit champion into the winner of the world’s biggest road race.

The 32-year-old had never before finished in the top 10 of a Grand Tour, though, in his only previous serious attempt to win one, he was forced to withdraw following a crash midway through last year’s Giro d’Italia.

There was one significant scare for Thomas with around 19km to go when the bike almost slipped from underneath him on a right-hand bend.

Thomas may have known he had a buffer to play with, but he was not taking it easy as he was fastest through the first and second splits before grinding up the Col de Pinodieta and dropping back.

Dumoulin had to console himself with his third career Tour stage win — all of which have come in individual time trials.

The Team Sunweb rider’s day did not get off to an ideal start when he could not find his time trial skinsuit in the morning.

But with his clothing sponsor based just across the Spanish border in San Sebastian, an emergency call was placed and they whipped him up a new set of the world champion’s rainbow stripes in time.

Bournemouth’s Howe becomes first Premier League manager to take voluntary pay cut 19:45
Kevin Mitchell: Hard to figure out why it took so long to cancel Wimbledon 19:47
Gordon Elliott backs decision to end jumps season but rues lost opportunities 18:30
America at Large: On Long Island, longing for a return to our field of dreams 18:00
Fairyhouse and Punchestown festivals cancelled as National Hunt season ended 17:48
Here is your handy guide to sport on television this week