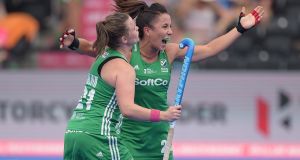 The dream continues. Anna O’Flanagan’s 13th-minute goal handed Irish women’s hockey its biggest moment in its 125-year history, a 1-0 win over the world number 10 side to make Ireland the first side assured of a quarter-final place at the World Cup in London.

They did so from a group as the only side not operating on a professional basis. History has no basis for this either. Their last World Cup appearance came in 2002, their last group stage win was in 1986.

To be in such a position is beyond their wildest dreams – coach Graham Shaw and O’Flanagan both said the hopeful target was four points from two games and having a shot at England on Sunday.

This route means no need for a crossover game for second or third in the group – just a straight passage to the last eight thanks to this win over India.

They could soak up the atmosphere of a sold-out Lee Valley Stadium in London with 10,600 fans in the knowledge they cannot be overhauled at the top of Pool B, and another big day out next Thursday.

“We always felt we could get out of the pool in the top three,” Shaw told The Irish Times. “That was definitely something we targeted, to turn it into these one-off games. Now to go straight to the quarter-final, I am not sure we genuinely believed we could do it.”

Key to the performance was the mindset. This Irish team has been through many devastating setbacks, missing out on the 2016 Olympics via the width of a post the most piercing memory.

Yet Shaw says there is a different mindset now, one which former rugby international Gary Longwell has helped foster since coming on board as their first psychologist.

“With experience we now see these games out. In 2014 we decided to focus on conditioning so that we can last those last 15 minutes. That fuels inner belief; no matter who they play against, they can push them.

“Gary has been fantastic with the girls, giving them real confidence. But they still have to go out and execute, and they did brilliantly.

“There’s a core group of senior players who have been through a lot, and they deserve this more than anyone. They have dedicated their lives to this for 10-plus years; to get a quarter-final with just two games played, it is just a dream come true for all of us.”

For O’Flanagan she was the charismatic spark in the key clinches at each end of the pitch. Her deflected effort was her 64th international goal, one short of the Irish record held by Lynsey McVicker.

Body in the line

But it was her video work the day before that was to prove critical as she charged down several penalty corners to keep the precious lead intact, putting her body in the line of 120kph shots for the cause.

“I absolutely relish that challenge. I was watching that drag-flicker for a lot of hours yesterday, and there is no better feeling than taking a block like that for your team mates. I’ll do it as long as they want me to. Once you run the right line it will hit you in some way or other.

“For so many years we have been banging on the door of world hockey. We’ve come to big tournaments and fallen at the last hurdle. Coming here, we knew we had a lot to show, and we’ve gotten as good a set of results as we ever could have hoped for.

“We’re so delighted, mostly because we are playing to our potential, to show world hockey what we are all about.”