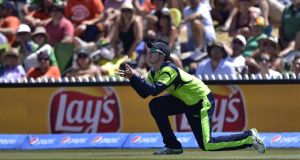 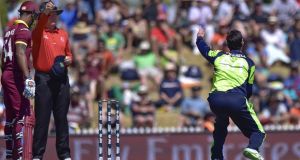 George Dockrell appeals for an LBW call on Denesh Ramdin and is given it by umpire Bruce Oxenford as West Indian batsman Lendl Simmons looks on. Photograph: Marty Melville/AFP/Getty Images

They say a week is a long time in politics and when it comes to our victory over the West Indies in beautiful Nelson on Monday, the same holds true.

Indeed I’d go further and say it’s amazing the difference a day can make, a rest day in particular. And so it proved from the Scotland performance, where we were lethargic, lacklustre and sloppy, to that against Bangladesh, where we were energetic, focused and clinical.

Sometimes a rest day can be as beneficial as any practice. A day off away from the cricket, with some guys taking in Bondi Beach and a few of us seeing Sydney harbour, was very much needed. It was great to catch up with Trent Johnston for lunch and to see how he has been adapting to life in Sydney. TJ was an imposing figure in Irish cricket and I’m glad that I had the pleasure of playing for four years alongside someone who has contributed so much to Irish cricket.

We knew we needed to leave Sydney on a high and we did that after beating higher-ranked Bangladesh. Our bowling was well drilled with every bowler playing his part, and we backed that up with some brilliant fielding as a unit.

Our captain William Porterfield led from the front with some of his customary diving stops. Knowing that he is fielding at extra cover gives me that extra bit of confidence as a bowler, as he makes one or two stops per game that others wouldn’t. We restricted Bangladesh to 186 and then chased it down for the loss of six wickets, with the impressive Andrew Balbirnie making a mature 50 not out.

After the game, it was time to pack up all our gear and prepare for an early-morning flight to New Zealand. We were looked after well, our baggage being sent directly to our hotel once we had checked it in.

After a three-hour flight to Auckland and a short stopover, we got on a one-hour flight down to Nelson on the South Island. Even though the flights were relatively short, we spent nine hours travelling and that can take a toll. With all our games in different locations, this travel can add up, so it’ll be important that we look after our bodies before and after travel days.

We arrived at the beautiful Monaco Resort and were shown to our comfortable little cottages. Nelson is a small place with the ground and town centre all very close; however, with our stay being so short, we didn’t get to see much of it, unfortunately.

On our first day we had training in the top-class facilities and this helped to get us back in the groove.

That afternoon as we went to get some snacks a few locals came up to us to say how excited they were about the game and, more importantly, that they would be supporting us. Finding out that the game was a sell-out also added to the excitement.

To keep ourselves occupied that evening we set up a little table tennis tournament as we had a table in our team room. It was a game I hadn’t played since my days in Kildare Place National School in Rathmines. All being sportsmen, it was never going to be just for fun and I was delighted to leave with the crown that evening!

The day before the game we had a short session, doing a bit of last-minute prep. Given that we’d been preparing for this game for a couple of months, it was really about refining what we already knew. We then spent a nervy afternoon trying to relax and had a team dinner that evening.

I could barely sleep that night. It hit me as I went to bed just how important the first game was for us. I tried to bat away the hundreds of thoughts racing through my mind and get to sleep, which I did eventually. I woke up even more nervous and couldn’t wait to get into the match-day routine. The ground was superb. The Irish support was immense and, as we belted out Ireland’s Call, it felt like we were playing in Dublin.

We bowled well, aided by brilliant fielding yet again and put the West Indies under a lot of pressure. A special mention should go to Andy McBrine on a very mature spell in his first World Cup game. I was delighted to pick up the scalps of Chris Gayle, Marlon Samuels and Denesh Ramdin and get a couple of catches too.

Then it was over to our batsmen. Paul Stirling and Porterfield set the tone and everyone else followed suit. Clean hitting from Stirling, Ed Joyce and Niall O’Brien kept us ahead of the required run rate and, bar a little hiccup at the end, it was a perfect run chase.

John Mooney has become our finisher, hitting the winning runs versus England in 2011, and he did the same again to take us home. To chase down 305 was an impressive feat.

There has only been five chases over 300 in World Cup history and now Ireland has three of them – Holland 2011, England 2011 and now West Indies 2015. That’s an impressive stat in itself and this victory will give us confidence for the rest of the tournament.

It was great to see the support from back home straight away. We have fantastic support and it does mean a lot to us.

Now it’s onwards to Brisbane to take on UAE and to try to get two for two. Thankfully we have a few days off to relax before we get back into it.

I’m proud to have been part of such a historic win. Hopefully we can use this momentum now and build something special.

Connacht setting sights high ahead of new Pro14 season 07:00
Gordon D’Arcy: If South Africa moves up north, it could all go south 06:00
Seán Moran: Covid ripple effect leaves GAA in vulnerable position 06:00
Davy Fitzgerald has issues with GAA’s plans for League final 06:00
When Down’s 1960 All-Ireland victory brought down barriers 06:00
Here is your handy guide to sport on television this week