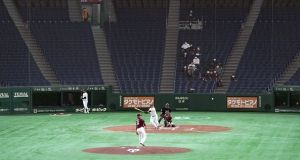 Bookmakers have noted bets on Japanese baseball have been popular since the outbreak of Covid-19. Photograph: Getty Images

British MPs have implored online gambling firms to impose a temporary betting cap of £50 a day during the Covid-19 crisis, as evidence emerged that they are pushing punters towards riskier wagers in the absence of mainstream sport.

An internal email sent by a senior manager at William Hill, seen by journalists at the Guardian, advises staff to “talk to your customers about what other things they can bet on – table tennis and Japanese baseball are proving very popular”.

The company has also posted social media adverts from its US Twitter account offering bets on “international soccer action”, meaning the Belarus Premier League. Firms including 32Red are advertising on Twitter in a bid to win more custom for online casino games, which have much higher rates of addiction than sports betting.

Both Betway, recently hit with a record £11.6m fine over problem gambling failures, and MansionBet have paid-for Google listings promoting “virtual” events, where customers bet on computer-generated football matches. In one instance, a Spanish man who set up an international tournament for players of the Fifa computer game lashed out at bookmakers for offering odds on the games, urging them to stop.

Gambling companies changed strategy after the cancellation of major sporting events, which has sent their share prices into freefall.

In a letter to Britain’s industry trade body the Betting and Gaming Council, MPs in a cross-party group examining gambling-related harm urged firms not to put protection of their finances before customers’ wellbeing.

“We are deeply concerned that as we go deeper into this crisis, more and more people will turn to online gambling as a distraction,” wrote Labour’s Carolyn Harris, the Conservatives’ Iain Duncan Smith and SNP MP Ronnie Cowan.

“If the industry were to self-impose a daily limit of £50 … it would be a clear demonstration that the industry is willing to act responsibly and do what they can to protect society and peoples’ finances, at this dreadful time.”

The MPs also called for a block on customers opening multiple accounts and quicker intervention with customers who display signs of disordered gambling. Experts warned that people with a gambling disorder, many of whom will be cooped up at home during the coronavirus crisis, are prone to betting on events whose outcome they cannot possibly estimate.

Matt Gaskell, clinical lead for the British NHS northern gambling clinics, said: “In our clinics some of the most harmful gambling is that which diversifies to betting on things our patients know nothing about.

“The industry continues to do all it can to increase profits, keep gamblers immersed and in continual play, at the expense of people’s lives.”

Harris said: “If they’re targeting someone to bet on this kind of sport, or computer-generated events, it can only be because that person is someone with a problem, to be gambling on something that obscure. It’s the industry trying to capitalise on a national disaster, encouraging problem gambling with reckless and foolhardy behaviour.”

Co-chair Duncan Smith added: “It’s pretty appalling that in the midst of all this difficulty and suffering, gambling companies are so desperate to ensure that those who gamble can continue to throw their money away that they direct them to all sorts of little-known and little-watched sports.”

There has also been concern among industry employees that shops remained open for too long before they were eventually ordered to close by Boris Johnson. In the same email that offered advice on which sports to offer bets on, sent last week, William Hill staff were told it was “business as usual” in the bookmakers’ high street stores.

The government had already advised against people gathering in social spaces such as bars and restaurants. Rival Betfred has also been criticised for continuing to welcome customers into shops, potentially putting staff and gamblers at risk. One Betfred employee, who asked to remain anonymous, said that staff had been told that they would get hand sanitiser but that it would not arrive for a while.

“There were no gloves or nothing like that and we had to clean the shops and clear away the pens people use to write down bets. I was sitting in there and it was all older people coming in the shop, over-70s staying in there for ages, and it just seemed crazy. Staff were worried because they have nans and granddads and there are sick people in their families. It just feels like a breeding ground for it.”

William Hill said money taken from gamblers betting on Fifa football events had been donated to charity and that it had reduced its marketing spend since the crisis. It said it was being “extra sensitive” with its marketing messages.

32Red, Betway and MansionBet have been approached for comment.