Ken Early: Klopp perfectly entitled to have his say on the coronavirus crisis

Covid-19 outbreak has spawned a vast political, ethical and moral crisis which affects us all

March 10th, 2020: Liverpool manager Jürgen Klopp has criticised a Madrid-based journalist for travelling to the UK from Spain and then raising concerns over coronavirus. Video: Reuters 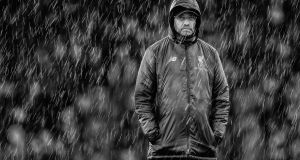 Jurgen Klopp: “First and foremost, all of us have to do whatever we can to protect one another. In society, I mean. This should be the case all the time in life, but in this moment I think it matters more than ever.” Photograph: Michael Regan/Getty Images

In another timeline, Liverpool won the Premier League over the weekend. This article would undoubtedly be saluting Jurgen Klopp’s messianic achievement in ending Anfield’s 30 years of hurt. In our reality, none of this happened. So instead of praising Klopp, let’s kick him while he’s down.

“Look, what I don’t like in life is that a very serious thing, a football manager’s opinion is important,” he said.

The video of a celebrity urging people not to listen to celebrities attracted millions of views and tens of thousands of approving comments about how this exceptionally popular celebrity had nailed it once again.

Yet after a few days, you began to wonder if Klopp had actually got this one wrong. True, a football manager’s top-of-the-head opinions on the likely epidemiological impact of shutting down football matches – or schools or public transport or any other such measure – are probably not worth very much.

But that doesn’t mean that Klopp, or anyone else who likewise lacks qualifications in virology or epidemiology or other relevant-seeming technical fields, doesn’t have anything worth saying about what is happening. The Covid-19 outbreak is not simply a technical, medical and logistical problem to be solved. It’s also a vast political, ethical and moral crisis.

Think about the vulnerable in our society and act where possible with compassion for them. Please look after yourselves and look out for each other

On March 13th, with English football having taken the decision to suspend itself for the foreseeable future, in the absence of firm instructions from the UK government, Klopp issued another statement on the crisis. It sounded as though he’d had some second thoughts about what he had said previously.

“I don’t think this is a moment where the thoughts of a football manager should be important,” he had to begin, for fear of being labelled a hypocrite, “. . . but . . .” – ignore everything before the word ‘but’ – “I understand for our supporters they will want to hear from the team and I will front that. First and foremost, all of us have to do whatever we can to protect one another. In society, I mean. This should be the case all the time in life, but in this moment I think it matters more than ever.”

First and foremost, all of us have to do whatever we can to protect one another. It may be that to the Jurgen Klopp of March 4th, this basic ethical principle was so obvious that it didn’t need saying. The Klopp of March 13th knew better.

The rest of his statement kept repeating this same point – that our duty is to each other, that our priority should be to protect lives and health, that the disruptions are unwelcome but necessary: “We don’t want games or competitions suspended, but if doing so helps one individual stay healthy – just one – we do it no questions asked.

“If it’s a choice between football and the good of the wider society, it’s no contest. Really, it isn’t . . . Today’s decision and announcement is being implemented with the motive of keeping people safe. Because of that we support it completely . . . The message from the team to our supporters is only about your wellbeing. Put your health first. Don’t take any risk. Think about the vulnerable in our society and act where possible with compassion for them. Please look after yourselves and look out for each other.”

On the government response, Klopp said: “None of us know what the final outcome will be but we have to have belief that the authorities make decisions based on sound judgment and morality.” Note the phrase “we have to have belief”, which is not the same as “we believe”.

It’s possible Klopp’s faith in the decision-making process of the authorities had been tested by what had happened in those nine days. These were days in which the UK government had declined to follow other European countries in introducing drastic measures to try to curb the contagion. Instead there had been vague talk of “herd immunity” and “taking it on the chin”.

In other words, British policy-makers were prepared to accept a certain number of deaths if it meant avoiding costly economic disruption.

There’s nothing new about this. It’s illustrated in a scene in the political satire The Thick of It, broadcast in 2005. Minister Hugh Abbot has told spin-doctor Malcolm Tucker that an expert has convinced him to take a position Tucker doesn’t like.

Tucker: “My expert would totally disprove that.”

Abbot: “Who is your expert?”

Tucker: “I don’t know, but I can get one by this afternoon. The thing is, you’ve been listening to the wrong expert. You need to listen to the right expert. And you need to know what an expert is going to advise you before he advises you.”

Political decisions do not necessarily reflect overwhelming expert consensus. Often such consensus does not exist. Decisions reflect the political and ethical priorities of the decision-makers. If the priority is to avoid economic disruption you get one set of decisions, if the priority is to minimise deaths you get another.

Tim Shipman, the well-connected political editor of the Sunday Times, reporting on how the British government’s policy on the crisis has evolved over the past fortnight, included a quote from an anonymous “thoughtful Tory” on a problem that will bedevil future decisions: “It’s the intergenerational question. It is unsustainable to have people in their youth put their whole life on hold for months while the economy tanks to save a 91-year-old who would have died six months later anyway.”

First, it’s curious that not many “thoughtful Tories” were saying it was “unsustainable” for society to be dictated to by the old, heedless of the preferences of the young, while Brexit and the Johnson regime were powering to victory thanks to the votes of millions of pensioners, while under-40s overwhelmingly voted in the opposite direction.

That suggests the real concern here is not for the frustrated young people, chafing at restrictions that only benefit the old and weak, but rather for the economy, forced to tank while the people who should be serving it are distracted by the question of how to protect their lives and health.

But what about the central contention – that the restrictions we’re now living with are intrinsically unsustainable? Well, we all have our political and ethical priorities. There are those who think the virus can’t touch them, who would like things to “get back to normal” as quickly as possible.

There are those who feel that normality is impossible if old and vulnerable people remain confined to their homes for fear of a still-circulating virus. Based on his statement of March 13th, it sounds like Jurgen Klopp might be one of those.

There are those who wonder if any truly “normal” system would keep getting knocked sideways by a new global crisis every few years – should “normality” really be this fragile and precarious? Are we really sure we want to keep going this way?

One thing is for sure: nobody should be shy of saying what they think about all this because they don’t feel technically qualified to speak. These questions are not just technical, they are also political and ethical, and decision-makers must hear what our priorities really are.