Covering all the bases: Top class amateur golf to rallying and horse racing on the beach 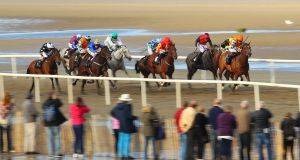 A view of the Laytown Races in 2018. Photo: Tommy Dickson/Inpho

This will be the first time that The Amateur Championship (also known as the British Amateur) will be held outside of the UK since 1949 when it was last hosted by Portmarnock. The tournament is one of the biggest events on the amateur calendar and the rewards for winning are big – namely a place in the field for the Open Championship in Portrush in July as well as next year’s Masters and US Open. Strokeplay qualifying takes place over the first two days at The Island and Portmarnock before the top 64 qualify for the matchplay stages which are held in Portmarnock. With small crowds and the world’s best amateurs on show this is a perfect chance to see some of the stars of the future up close.

The famous Donegal Rally is generally considered to be the peak of Irish rallying and is the only three day tarmac rally in the UK and Ireland. With 70,000 spectators expected to line the course over the three days this is a huge event in the northwest and indeed last year crews from the UK, USA and Australia travelled to take part. The main rally is run over 20 stages beginning in Letterkenny and taking in areas such as Buncrana, High Glen and Carnhill while on Sunday the spectacular views from Fanad and Atlantic Drive are on offer. With 160 crews in the main rally there is also a historic rally and a junior rally so there is plenty of action to take in over the three days.

With categories ranging from under-12s right up to over 50s, there is a lot of racing to watch at the Coastal Rowing Championships which take place at Whitegate Rowing Club again this year. Coastal rowing originated from traditional boats and many such as Cork Yawls, Donegal Skiffs, East Coast Skiffs and Wexford Cots are still on show and racing at the national championships. With food and drinks stalls set up on the beach you can come along with your chair and sit out to watch what is one of the biggest regattas in Europe with hundreds of crews competing.

Over the last number of years Ironman has grown into a global phenomenon where competitors push their bodies to the limits with a 3.8km swim followed by a 180km cycle and then a full 42.2km marathon to finish. This year’s event in Dún Laoghaire is a half Ironman with competitors beginning their swim at Sandycove before the cycle goes down into Wicklow and back before the marathon around Dún Laoghaire town. In Youghal it’s a full event beginning with the swim at Claycastle Beach before the cycle along the bay while the marathon finishes in the centre of the town. Registration for the Dún Laoghaire event is still open if you fancy taking part but what’s probably more enjoyable is going along to see others doing it.

The only official Turf Club racing to take place on a beach is always a stunning spectacle and one that grows more popular every year. Short races of only six or seven furlongs mean speed is everything at Laytown in an event that has been run since 1868. As the tide recedes throughout the day the course is set up on the beach while spectators watch from the marquees in a field which sits up above the beach. Tickets are only €10 with the first race set to start at 4pm after the tide has gone out and the course has been set up.

1 Tipping Point: DeChambeau’s transformation raises questions, but who will ask them?
2 Different Strokes: Frankie leaves Fleetwood for Hollywood
3 Rory McIlroy: ‘It sort of sucks going off in the middle of the pack on a Sunday’
4 Trent Alexander-Arnold’s ‘genius moment’ summed up Liverpool
5 World Athletics freezes out Russian athletes after $5m fine goes unpaid
Real news has value SUBSCRIBE