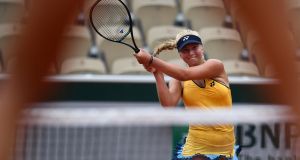 Denmark’s Clara Tauson returns the ball to Jennifer Brady of the US during their women’s singles first-round match on day three of The Roland Garros 2020 French Open in Paris. Photograph: Getty

Teenage Danish qualifier Clara Tauson caused a shock as she beat American 21st seed Jennifer Brady 6-4 3-6 9-7 in the opening round of the French Open on Tuesday.

The powerful 17-year-old Tauson, making her main draw debut in Grand Slams with a ranking of 188, played fearless tennis to edge out the recent US Open semi-finalist.

Tauson served for the match at 7-6 but failed to take any of three match points, the last one when her attempted drop shot hit the tape and fell agonisingly back on her side.

But she refused to let her chance slide and broke Brady again before clinching victory on her fifth match point.

This year’s Australian Open junior champion blasted 48 winners throughout the contest as she added her name to the list of rising young stars in the women’s game.

Meanwhile, local favourite Kristina Mladenovic was once again in absolute control and then fell apart. The collapse occurred after an umpire’s decision robbed her of the opening set in a 7-5 6-3 loss to German Laura Siegemund.

The French woman, who this month lost in the US Open second round to Varvara Gracheva after leading 6-1 5-1, thought she had claimed the opening set 6-1 when one of her shots bounced twice, but Siegemund played the ball back and was awarded the point.

“That double bounce, it was set point, supposed to be 6-1, and I think the chair umpire was the only person not to have seen it on the centre court,” said Mladenovic afterwards. So we can call that a turning point . . . yeah, it was definitely a key point.”

At the US Open, Mladenovic was one of the players facing tougher restrictions after she had been in contact with her compatriot Benoit Paire, who tested positive for Covid-19.

The 27-year-old described the New York experience as “a nightmare”.

Tuesday’s match was not exactly a dream, either, as mental fatigue and a lack of preparation took their toll.

“I couldn’t prepare the way I wanted, so it obviously affected my whole preparation,” she said.

“I wanted to play Rome, to play Strasbourg, but I couldn’t be ready for it. It’s brutal for the body when you are eight days [in] lockdown in a hotel room. If I just talk about those eight days, because even the first week where I competed in my singles I was basically isolated and couldn’t train,” said Mladenovic.

On the double bounce that cost her the first set on Tuesday, she did not blame her opponent.

“Well, she would have been the best and most fair player on the tour if she would have done that. Unfortunately, she didn’t. I didn’t expect her to do it,” said the French woman.

Australian Open champion Kenin arrived in Paris after a 6-0 6-0 pounding by Victoria Azarenka in her only clay-court match in Rome and was facing the 125th ranked Russian for the first time in her career.

After an early trade of double breaks of serve, Kenin broke Samsonova again in the ninth game and then held serve to take the opening set.

The players then left the court due to rain and when they returned Kenin quickly found herself down 3-0 and then 5-1 as Samsonova started painting Court Suzanne Lenglen with winners off her forehand and backhand.

The diminutive Kenin, however, did not give up and got a service break back just before play was halted again after the Russian complained of slippery court conditions.

When play resumed, Samsonova managed to hold her next service game to take the set and then broke her fellow 21-year-old’s serve in the decider to take a 2-0 lead.

Kenin decided to change her strategy and started hitting a lot of loopy high balls deep into the Russian’s court and it worked as she levelled things and then got the crucial service break in the eighth game.

She converted her first match point when Samsonova, who once again failed to get past the first round at a Grand Slam, sent a backhand wide.

In the second round Kenin will meet Ana Bogdan after the Romanian defeated Timea Babos 6-4 6-2.

Elsewhere, Czech second seed Karolina Pliskova managed to rein in her errors and found a way past battling Egyptian qualifier Mayar Sherif with a 6-7(9) 6-2 6-4 victory.

Former world number one Pliskova had 27 unforced errors and hit six double faults in the first set under the open roof of Court Philippe Chatrier, struggling to find winners from her power game in slow conditions.

“Conditions were not easy, and I think she also played a little better than I maybe thought, because I didn’t know much,” said Pliskova afterwards.

“Let’s not talk about my level. I think there is big room for improvement, but it is what it is and I’m in the next round, which counts.”

Facing the 24-year-old Sherif, who was making her Grand Slam main draw debut, for the first time Pliskova faced constant trouble with return of the Egyptian’s serve but still managed eight set points.

But Sherif saved five of them in the tie break to win the opening set as a frustrated Pliskova slammed her racquet on court.

But the Czech returned to court looking focussed and improved drastically in the second to level the match with three breaks of her opponent’s service games.

A crucial break in the seventh game of the deciding set then proved enough for the second seed.

Pliskova, who retired in the final in Rome with injury before coming to Paris, sealed the match with her fifth ace on her second match point.

“I relaxed a little bit in the second set, and of course she was just playing an ugly game,” said Pliskova, who reached the semi-finals at Roland Garros in 2017. “There was not much room or not many points where I felt really great. But I was just able to find a little bit better level than in the first set. The experience which I have is much more than her but . . . she was fighting and she was not giving me much. No matter how terrible was my level, I still somehow, like, believed, let’s say.”