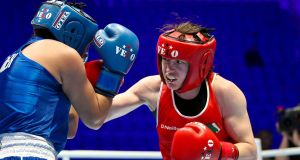 Katie Taylor did not realise she had qualified for the Rio Olympics after claiming her third power- and speed-driven win at the Women’s Boxing World Championships.

The Irish lightweight, famous for her blinkered focus, one-fight-at-a-time approach and an isolationist mentality when she goes into the bunker of a major championship, breezed in from her 3-0 win over Mexico’s Victoria Torres and disarmed the room.

Taylor had just secured a World Championship semi-final place and a ticket to Rio to defend her lightweight gold from London 2012.

It took an affirmative nod from an AIBA boxing official and a chorus from her coaches Zaur Antia and Eddie Bolger to appease the Olympic and defending world champion.

She will now face Estelle Mossely from France, who beat Yana Alekseevna, the Azeri boxer who handed Taylor her first defeat in five years in Turkey last month. And she will be in Rio.

They have all fallen away.

“It didn’t happen for me last month,” said Taylor of her Rio qualification. “Zaur [Antia] has done everything for me with Eddie [Bolger] over the last few months. I wouldn’t be here without them.

“It’s great to be in the semi-final with my team-mate Kellie Harrington, who is also through. It’s great to have company in the medal stages. I’m feeling great. I was a bit tired there today, but you are always going to be tired in those kinds of fights.

“I’ll have my rest day tomorrow and then refocus for the semis.”

This is the rugged terrain of the narrowing rounds of a championship and is familiar territory for Taylor, but it is an entirely new landscape for Harrington, who has shown growing promise with every one of her bouts.

Taylor may sometimes fail to get decisions, but will never be outclassed. But Harrington has shown that she, too, has the equipment to go deep into the draw.

“I’ve always looked up to Katie since I started boxing,” said the Dubliner, who has never been so far in a major championship before. “She’s the role model. Now it’s hard to believe I’m here. I’m on that podium as well and, yeah, I beat a Kazakh boxer in Kazakhstan, which is very tough as well.

“That’s the only thing I was afraid of. I’ve had a few bad decisions go against me against home-town boxers and this time I was thinking I really have to push, and I got it.

“Now I’m so happy. I have never been to anything like this in my life. Ever. This is something I am never, ever going to forget.”

Harrington faces Canadian Sara Kali on Thursday morning, with Taylor in against Mossely in the afternoon, Irish time.

Both will expect the level to go up, with Taylor hoping to get her timing sharper. There is always something to tinker with, but at no stage in her eight minutes with Torres was she in a position of discomfort as she went though most of her range.

Combinations and firing off lefts coming out confounded Torres, who began the match swinging to try and knock Taylor off her preferred tempo. But it was the Irish boxer who shaped the rounds and, apart from a short toe-to-toe exchange in the second to show the judges what a scrapper she can be, she held the fight in her grasp through all eight minutes.

She also left the ring without her nose bleeding, a small issue at the beginning of the week.

The Olympic champion is now two wins away from a sixth title and surpassing Mary Kom’s record, which she equalled in Jeju, Korea, two years ago with her fifth successive World Championships gold medal.

Shane Lowry makes strong start with opening 69 at Muirfield Village 21:29
Richarlison’s touch of class rescues point for lacklustre Everton 21:11
Tottenham lucky not to leave Bournemouth empty-handed after another poor show 20:53
Dara O’Shea proves his worth with second goal for West Brom 20:30
F1 warns Leclerc over breaking Covid-19 protocols 20:24
Here is your handy guide to sport on television this week