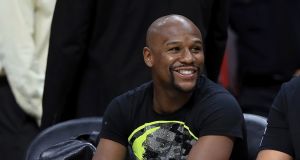 Floyd Mayweather watching an NBA game between the Miami Heat and the Indiana Pacers in Miami on Wednesday night. Photograph: Mike Ehrmann/Getty Images

Floyd Mayweather took a moment on Wednesday to mock Irish UFC star Conor McGregor – even though the prospect of a fight between the two stars seems distinctly unlikely.

Mayweather posted a video to Instagram of McGregor tapping out to Nate Diaz at UFC 196 in March – and the boxer offered $10,000 to the best caption posted about the video. The video ends with a caption: “49-0 vs Connor the Notorious Quitter.” Conor McGregor spells his first name with one N.

Later on Wednesday, again on Instagram, Mayweather referred to McGregor as “Conor McTapout” and vowed: “I’m gonna slap the s**t out of McGregor when I see him.”

Earlier in December, McGregor obtained a boxing licence in California, but despite all the posturing, a match-up between two of fighting’s biggest names seems a world away.

UFC president Dana White told Yahoo earlier this month: “It’s fun to talk about this [Mayweather] fight and what might happen, but what commission would let that fight happen? Really, think about that.”

Leonard Ellerbe, the chief executive of Mayweather Promotions, called McGregor’s acquisition of the boxing licence a “con job” and said: “It’s all a game. It’s all calculated to get more fans.”

The UFC announced in November that McGregor had vacated his featherweight title after failing to defend the belt, instead opting for a pair of welterweight fights against Nate Diaz before claiming the lightweight belt by defeating Eddie Alvarez in New York on November 12th.

McGregor, however, disputes that he has relinquished the belt. McGregor, whose girlfriend is expecting a baby next year, is unlikely to return to the Octagon before May.

Mayweather retired from boxing after beating Andre Berto in September 2015, walking away with a 49-0 professional record.