The end of the Kolpak player: How Brexit is to affect county cricket 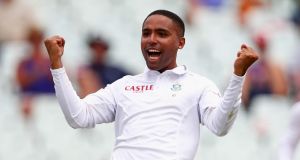 South Africa spinner Dane Piedt is among a number of Proteas players seeking a contract in county cricket before the Kolpak loophole is shut. Photograph: Getty/Julian Finney

In February 2000, a butterfly flapped its wings in the small town of Östringen, just over the German border from France. And with that one flap, English cricket was changed for a generation. Maros Kolpak, a goalkeeper in the second division of the German handball league, signed a new three-year contract with his team, TSV Östringen. Because he was Slovakian, the national federation decided to register him as an overseas player. Under league rules, each team was only allowed two foreigners in its squad. Kolpak, who had lived and worked in Germany for three years already, decided to challenge them in the local court. Slovakia wasn’t in the EU, but had recently signed a trade agreement with it. Kolpak argued it entitled him to work in Germany without restriction.

Kolpak’s case went all the way to the European court of justice in Luxembourg, where, on May 8th 2003, after almost a full year of deliberation, the judges finally settled in his favour. He returned to Östringen and resumed his career. But a strong wind had started to blow. The next February, Leicestershire signed the South African spinner Claude Henderson as a UK-registered player. He had played seven Tests, but felt he had been frozen out by the selectors. South Africa was one of 78 nations to sign the Cotonou Agreement with the EU. So Henderson was covered by the same court ruling, and entitled to the very same rights, that allowed Maros Kolpak to play for TSV Östringen.

In the past few weeks, three recent South Africa internationals have signed Kolpak deals. Simon Harmer has joined Essex, Stiaan van Zyl has joined Sussex, and Hardus Viljoen has headed to Derbyshire. All three have played Test cricket for South Africa in the previous 12 months, and all three have decided to give up their international careers for the duration of their contracts. Dane Piedt and at least one other current Test player are also said to be seeking Kolpak deals. This is likely to be the last great gust, a final flurry of Kolpak signings before Brexit comes into effect, and the route into English cricket through EU legislation is cut off by the Home Office.

Henderson was the first Kolpak player. Within five years, 50 more followed. The ECB tried to turn back the tide. They brought in a rule that no Kolpak player could have played international cricket in the year before he had signed. But this was challenged, and overturned, when Yorkshire signed Jacques Rudolph in 2007. So the ECB started charging fees to teams who included more than two Kolpak players in any one match. This didn’t work either. By 2008, in an infamous game between Leicestershire and Northamptonshire in a Friends Provident Trophy match at Wantage Road, 12 of the 22 players were South Africans on Kolpak deals.

In 2009, the ECB finally found a fix. They concocted a another new rule which meant that only players who had held a valid work permit for four years would be able to sign Kolpak deals, unless, like Viljoen, Harmer, and Van Zyl, they had played one Test match in the past two years or five in the past five. Since the ECB made that change, the debate has settled down, and the number of Kolpaks on the county circuit has declined. Today the ECB say it is around 3-4% of the domestic/non-overseas registered playing base. This latest flurry of fresh Kolpak signings is down to three things: the weak Rand, the increase in quotas in South African cricket, and Brexit.

One of the many little issues that went unreckoned during the referendum campaign – incredible, this, since there can scarcely have been many more important things to consider – was what the result would mean for county cricket. But the Kolpak players themselves, like many other migrant workers in the country, soon began wondering where the result left them. The day after the vote, Brendan Taylor, on a Kolpak deal with Nottinghamshire, asked the ECB for guidance. They’re waiting to hear from the Home Office. In the meantime, cricketers are working under the assumption that any Kolpak deal signed before the end of 2017 won’t be affected by Brexit. A race is on, then, to hitch up with a county club before the door is shut.

The South African economy is weak, and the government has started pursuing an “aggressive” transformation policy, so players in South Africa have two good reasons to leave – income and opportunity. In 2015 Viljoen was weighing up an offer to move to New Zealand. He decided at the time: “I don’t want to have second best. You get brought up in your country to play for your country.” He’s now played one Test, against England, and seems to have changed his mind. There is talk of an “exodus” of top talent, though the player drain isn’t yet as bad as the one affecting South African rugby.

Even as the Kolpak system winds down, it’s still unclear after all these years whether it has improved English cricket or not. There are good arguments on both sides. The standard improved because there were better players on the circuit, but by being here those same players denied opportunities to young English players. What is clear, though, is that it has undermined South African cricket. Piedt counts as a “player of colour” in the quota system. If he and others like him sign, the situation will get trickier still. As for the man himself, Maros Kolpak is 39, and still playing handball. Only now he’s back in Slovakia. The Wisden Almanack tracked him for an interview in 2005. It was the first he’d heard that he’d become so famous, and he seemed to be tickled by the idea. He’d never intended to change anyone else’s life, he said, but “did it for myself”.