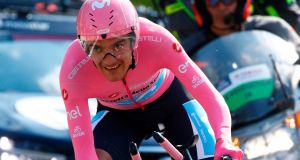 The Movistar Team rider went into the Verona time-trial with a solid cushion of almost two minutes over his nearest rival Vincenzo Nibali (Bahrain-Merida) and, in reality, needed a disaster to deny him victory.

He had no issues in the end and while Nibali went 49 seconds faster over the 17-kilometre distance, netting ninth behind the winner Chad Haga (Team Sunweb), Carapaz had more than enough in hand. He ended the three-week race one minute and five seconds ahead of Nibali, while former race leader Primoz Roglic (Team Jumbo-Visma) was strong enough to overhaul Mikel Landa (Movistar Team) for third.

“I want to enjoy this victory with my wife, my kids and speak on the phone with my parents. I’m very proud of what I achieved. I’m delighted to make my dream of winning a Grand Tour come true,” he said. “We must never forget our childhood dreams. They can always become reality with hard work and determination.”

Ireland’s Eddie Dunbar went into the final day determined to try to get the most out of his remaining energy reserves, but crashed during the time-trial and trailed in last on the stage. That saw him drop one place to 22nd overall, 42 minutes and 26 seconds behind Carapaz, but he retained his sixth place in the best young rider classification.

Dunbar’s strong performance during the race, including his third place on stage 12, bode very well for the future. He is just 22 years of age and was riding his first Grand Tour. Irish national champion Conor Dunne put in strong performances working for his Israel Cycling Academy team and should build more strength and endurance as a result of his participation.

In Germany, defending champion Sam Bennett had to be content with 10th in the Rund um Koln. He was part of the day’s breakaway but the group fragmented on the tough circuit, with Bennett ultimately finishing two minutes 55 seconds behind the winner Baptiste Planckaert (Wallonie-Bruxelles).

Eve McCrystal triumphed ahead of Ellen McDermott (Team Boompods) in the women’s event. Paul Forristal of the promoting club won the Orwell Two Day in Wicklow for the second successive year.