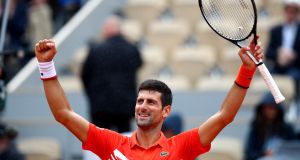 Novak Djokovic is into the French Open quarter-finals after a straight set victory over Jan-Lennard Struff. Photograph: Julian Finney/Getty

Novak Djokovic claimed his own piece of French Open history by reaching a 10th consecutive quarter-final at Roland Garros.

Rafael Nadal dominates the record books here but neither he nor Roger Federer has managed to reach the last eight every year for a decade.

Djokovic did so in style with a 6-3 6-2 6-2 victory over German Jan-Lennard Struff in just an hour and 33 minutes.

The world number one, who is bidding to become the first man in the Open era to hold all four Grand Slam titles for a second time, is the only man apart from Federer who is yet to drop a set this tournament.

Djokovic said: “I am satisfied so far with my game. I reached the quarter-finals and played as close to my best tennis on clay as I think I can at the moment. I’m really pleased with every aspect of my game.

“So everything is coming together beautifully. I’m motivated to fight for the trophy, that’s why I’m here. But it’s still a long way to go.”

Despite his high ranking and the fact he made the last eight here last year, Zverev had never beaten a top-20 player at a Slam, while this was his first victory over a top-20 player in what has been a tough season until now.

Fourth seed Dominic Thiem has been making headlines away from the court over the last couple of days but he produced his most impressive display of the tournament to beat Gael Monfils, the last French singles hope, 6-4 6-4 6-2.

Thiem, last year’s runner-up, is through to the quarter-finals for the fourth successive year.

The Austrian was able to complete his press conference this time having been evicted from the main press room following his third-round victory to make way for an impatient Serena Williams.

Thiem was understandably unhappy and told German Eurosport on Sunday that he believed Williams had shown a “bad personality”.

Expanding on the incident, he said: “I don’t know if she saw me or if she saw that somebody’s in the room. So, if she would have seen me, then it would be nicer from her to wait.

“But it’s also understandable, in a sort of way. She lost and everything. So I think it was a little bit mistake of her, mistake of the officials, but it’s forgotten. It was a funny thing, strange thing, which made a big round in all the social networks, but now I don’t put any attention on it any more.”

Thiem next faces Russian 10th seed Karen Khachanov, who reached the quarter-finals of a slam for the first time with a 7-5 6-3 3-6 6-3 victory over eighth seed Juan Martin Del Potro.

After saving two match points in the fourth-set tie-break, Paire served for the match at 5-3 in the fifth but Nishikori won the final four games to continue his remarkable record in deciding sets.

Simona Halep put in a champion’s performance to swat aside Iga Swiatek and return to the quarter-finals in Paris.

The third seed had a tough start to the tournament, dropping sets in her opening two rounds, but since then she has been ruthless.

After beating Lesia Tsurenko for the loss of three games in 55 minutes in round three, Halep needed only 45 minutes to defeat Swiatek 6-1 6-0.

The 18-year-old Pole, last year’s Wimbledon junior champion, had done brilliantly to make the fourth round but it was a rather chastening experience as she won just 21 points.

Swiatek admitted she was overwhelmed by the occasion, saying: “I wasn’t playing my game. I had a problem with just putting the ball in court. So I guess that was because of stress and lack of experience, but it’s natural.

“It’s a good experience for me. And I’ll remember that match. I’ll learn from it even though it lasted, like, 40 minutes.”

Halep joked she felt “very old”, saying: “To play against someone 10 years younger than me, that’s not easy. But I feel stronger on court.

“We’ll see the next one. They’re young, they have nothing to lose, so every match is tough.”

Asked if she felt bad for Swiatek, the 27-year-old added: “I can’t say I feel bad, because I played my best tennis. I prefer to play like that.

“But she needs many matches on those courts. She needs time. But for sure she will be high because, at 18, if you’re playing in the fourth round of a Grand Slam, that means a lot. So she will be all right after this.”

Anisimova made her breakthrough by getting to the fourth round of the Australian Open in January and has now gone one better. She is the first player born in the 2000s to make the last eight at a slam.

The teenager revealed she was inspired by Halep, saying: “I was watching Simona before my match and then I was like, ‘Oh, my God, her backhand down the line is so good’, and she was taking her time, and then I think I was mimicking it in my match.

“I can’t describe how excited I am. It’s amazing playing her. I couldn’t ask for a better match-up.”

Kenin, who had pulled off the biggest win of her young career by defeating Williams in round three, fought hard to take the second set against Barty but the Australian came through 6-3 3-6 6-0.

In the last eight, Barty will take on 14th seed Madison Keys, who is through to this stage at a Grand Slam for the fifth time in the last seven tournaments following her 6-2 6-4 defeat of Katerina Siniakova.

Keys and Barty played each other here two years ago in the first round, with the American winning 6-3 6-2.

Barty said: “I played her here at the French Open a few years ago in a match I would love to forget. So I think it’s very much a fresh, clean slate for this match.”