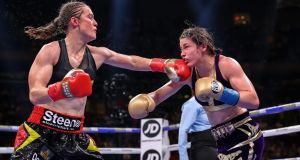 Delfine Persoon is to lodge a complaint after her controversial defeat to Katie Taylor in New York. Photograph: Tom Hogan/Inpho

Delfine Persoon is to lodge a complaint with boxing authorities after her controversial points defeat to Katie Taylor in New York on Saturday night.

Taylor made history at Madison Square Garden as she unified the lightweight division, adding Persoon’s WBC belt to her WBA, IBF and WBO straps.

The Bray boxer earned a majority points decision after the hardest fight of her professional career to date - two judges calling it 96-94 in her favour, with another scoring an epic clash at 95-95.

Afterwards a number of commentators - including Carl Frampton and David Haye - suggested it was a contentious decision, with Persoon unlucky to have lost.

And the 34-year-old Belgian has subsequently confirmed she will lodge a formal complaint after her defeat.

Speaking to Belgian publication Sudpresse, she said: “Yes, we will file claim. Even if it will probably not help anything.

“We were prevented from writing a big and so beautiful page in the history of boxing. Today everyone has seen and everyone knows that is a shame. But who will remember it again in a few years, reading my record where this championship will appear in the column of my defeats.

“In my eyes it’s not a defeat. What we will do now is of course make complaint. But without much hope because the weight of the Belgian boxing does not weigh heavy in the instances.

“Now all the better if we manage to move the lines a little in this area. But with my coach we will also quietly analyse this fight sequence by sequence, to have all the arguments to present an unassailable file.

“I said before I left for New York that if I did not win by KO the judges would never give me the victory, and that’s exactly what happened. I should have finished before the limit. I was very close to getting there in the last round.”

Persoon then suggested Taylor’s victory was a hollow one: “By the way, I wouldn’t want to be like her. Winning that way ... Okay, officially she is the winner, but if I would watch the match again in her case ... I wouldn’t want to go on living like that either. Rather lose it unjustly than win unjustly.”

1 Six Nations: A 21st-century tournament that saw Irish rugby come of age
2 David Clifford sends everyone back to their corners unbeaten
3 Sublime 67 leaves Rory McIlroy right in the mix at Torrey Pines
4 Six Nations: Ireland are contenders but England still the team to beat
5 James Durcan steals a draw for Mayo in Ballybofey
Real news has value SUBSCRIBE

Sam Bennett’s showing in Santos Tour Down Under bodes well for 2020 12:40
Armagh sprint past Cavan to start with a win 12:31
Equestrian: Mikey Pender finishes third in Abu Dhabi 12:30
Cork’s strength in depth sees them past Offaly 12:13
Coco Gauff’s journey ends at the hands of Sofia Kenin 09:43
Here is your handy guide to sport on television this week