Golden State Warriors bounce back in style in Toronto 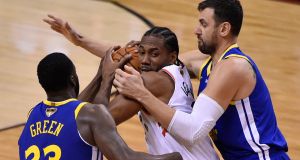 Draymond Green knew the Golden State Warriors could improve. Backed by the confidence that comes with five straight NBA finals, the Warriors forward felt sure enough to virtually guarantee a victory against the Toronto Raptors in Game 2. “We can still play better,” said Green after the Game 1 loss, “and I know we will.” On Sunday night, Green and the Warriors made good on that promise, delivering a defiant 109-104 win to tie the NBA finals at one game apiece.

Though the Raptors held the lead at the half, they were unable to put a stranglehold on the game. The Warriors, after all, projected a calm sense of resilience after their loss. That level-headedness was particularly evident in the second-half as they held off a late surge from the Raptors.

Klay Thompson led the Warriors with an impressive performance, scoring 25 points and going four-for-six from three-point range. Thompson, however, was forced out of the game in the fourth-quarter with hamstring tightness, and Golden State will fret over his fitness, especially as Kevin Durant is already sidelined while Kevon Looney sustained a chest injury in the first-half. Stephen Curry, who himself looked in physical discomfort in the early stages of the game, provided 23 points.

“It was a great win. We got to go home and protect our home floor and we’ll see about all the injuries,” Warriors coach Steve Kerr said after the game. “But I’m very proud of our team and in particular all the guys off the bench.”

“Third quarter, we didn’t play well enough,” Raptors guard Kyle Lowry said after the game. “We missed too many shots. They got out in transition and got a little confidence going. We lost the game there. Missing shots and not getting back on defense hurt us.”

The Raptors clawed back to reduce the Warriors’ lead to just four points early in the fourth quarter before Golden State’s Quinn Cook hit two three-pointers in under 30 seconds. And with 26 seconds remaining in the fourth quarter, with the Scotiabank Arena roaring, Danny Green hit a three-pointer to cut the lead to two. But the Warriors, as they so often do, calmly moved down the court. Andre Iguodala’s three-pointer with seven seconds left was the final dagger.

It was a tough loss for a Raptors team that had been confident after Game 1: in the series opener Kawhi Leonard didn’t lead his team in points but received strong support scoring. If Leonard could step up in Game 2 ,victory seemed likely.

And on Sunday night Leonard held up his end of the bargain. One of Leonard’s sponsors had distributed crowns reading “King of the North” before the game, and the slogan could be seen everywhere around Toronto. Leonard lived up to the billing too, leading the Raptors with 34 points and 14 rebounds. Still, his teammates did not provide much support. After scoring 52 points between them in Game 1, the Raptors frontcourt tandem of Pascal Siakam and Marc Gasol combined for just 18 on Sunday.

Game 2 served as a reminder of just how good the Raptors need to be to live with the reigning champions. - Guardian