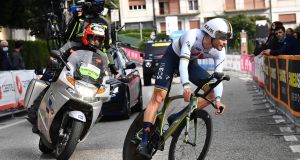 Filippo Ganna powered to his third stage win of this Giro d’Italia as Joao Almeida used the stage 14 time trial in Prosecco country to stretch his lead in the pink jersey.

The 34km time trial from Conegliano to Valdobbiadene became an intra-Ineos battle with nobody able to get close to Ganna or his team-mate Rohan Dennis, the Australian second by 26 seconds but a further 43 seconds clear of Brandon McNulty in third.

McNulty’s ride vaulted the 22-year-old American up the general classification standings, but most eyes were on the significant gaps between Almeida, sixth on the day, and his main rivals as Vincenzo Nibali and Domenico Pozzovivo lost time.

Deceuninck-QuickStep’s Almeida now leads by 56 seconds from Wilco Kelderman of Team Sunweb, with the gap to Pello Bilbao in third stretching to two minutes and 11 seconds.

“It was a good day,” said Almeida. “I did a good time trial and now I have a few seconds more on Wilco Kelderman. I hope to continue like this, I feel good.”

McNulty moved up to fourth with Nibali in fifth and Pozzovivo in seventh, with the same two minutes and 33 second deficit as sixth-placed Rafal Majka.

It was another dominant performance from Ganna in the rainbow bands as the time trial world champion.

The 24-year-old, who like Almeida is making his Grand Tour debut in this race, enjoyed two days in the pink jersey after winning the opening time trial, and then set about salvaging the race for Ineos following Geraint Thomas’ untimely exit with victory on stage five.

With Jhonatan Narvaez having won Thursday’s stage 12 in Cesenatico, the British-registered team now have four stage wins to their name, and will be favourites to add at least one more in the closing time trial in Milan.

“This is my third victory in the Giro, I am very proud of it,” Ganna said.

“This year I have improved a lot thanks to the help of my team. Every little improvement is important and contributes to performances such as this one.”

At the start of the day, organisers RCS and world governing body the UCI issued a joint statement to announce that 512 saliva antigen tests — the quicker coronavirus tests — on riders and staff conducted in the past two days had come back negative for Covid-19.

The tests, which went beyond the original protocols for the race, had been conducted following rising concerns over the security of the race bubble with the EF Education First team calling for the race to be ended this weekend after two teams had already withdrawn.

A full round of full PCR tests will be carried out during Monday’s second rest day.