Athletics Ireland say they are waiting on confirmation of tier levels 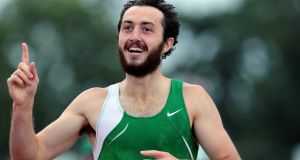 Irish athletics coach Feidhlim Kelly has encouraged the governing body of the sport to show some “imagination and invention” when restoring elite competition with the easing of the Level 5 lockdown. Championship qualification isn’t just at stake, says Kelly, but running careers.

Athletics Ireland got to stage their National track and field championship back in August, across four days and behind closed doors, only since then all competition has been on hold, further restrictions imposed once Level 5 was introduced.

According to their own guidelines, all “senior international athletes are defined as elite”, the Government in turn stating “professional, elite sports and senior inter-county Gaelic games, horse-racing and greyhound racing are permitted to continue behind closed doors” even in Level 5.

“I don’t understand why no effort has been made to put on some competition,” says Kelly, who coaches at the Dublin Track Club, his athletes winning five distance running titles at those National championships, including the top three finishers in the men’s 1,500m (Paul Robinson, Seán Tobin and Andrew Coscoran), plus Michelle Finn (women’s 5,000m and 3,000m steeplechase) and Iseult O’Donnell (800m).

“Right now there is nothing whatsoever on the horizon. We’re looking at maybe putting on a mile over Christmas, trying to get something going, and Ciarán Ó Lionáird has talked about coming back from the US to race, but no one has come to any of the athletes, asking what they need. They’re just left hoping, and it’s getting very frustrating. This is about their careers, not just championship qualification.

“Athletics Ireland need to show some imagination and invention, and we need it fast. Just have some healthy debate around how to put on some competition again, and communicate on it.”

According to Paul McNamara, director of high performance at Athletics Ireland, such discussions are continuing around how to best facilitate elite athletic competition post Level 5.

“There is quite a lot of activity going on behind the scenes,” he said. “The big priority is the national cross-country, which would normally be on around now, then the indoor season. These are being discussed, but they are only discussions, so there are certain things I can’t say.

“The big challenge is the exemption level, and for the indoors, that can only happen at Level 2, or below. At the very elite end, the primary concern is the path that plays towards building Tokyo qualification, as the association is keenly aware of that, and doing what they can to make it happen.

“Realistically, we’re back where we were last March, there is just no certainty around international fixtures. It’s all very well to schedule local competitions of some kind, and a lot of thought and effort is going into that, but with Tokyo in mind, those events aren’t going to help with rankings, which require a certain level of competition.

“And if we’re only allowing that cohort of athletes that have the exemption to compete, you’d struggle to pull together a National championships from that. Hopefully we’ll know more after the Government announcement tomorrow [Friday], because we are transitioning into that crucial period.”

Rio 800m Olympian Mark English has also joined Kelly’s training group, Athletics Ireland prohibiting him from racing at the National Championships after he competed in what was a Green List country 14 days prior. Kelly also cited a recent survey carried out by the Japanese athletics federation, where 571,401 athletes, 98,035 officials and staff took part in 787 races and track meeting from July 1st to October 4th, resulting in only one single case of someone involved contracting Covid-19 in the two weeks following.

UK Athletics have announced several fixtures for 2021, including an Olympic marathon trail in March over an enclosed course at the Royal Botanic Gardens, in London, while World Athletics on Tuesday released its provisional calendar for the 2021 season, which will see a return to a full schedule of 14 Diamond League meetings culminating in a winner-takes-all season finale in Zürich.

Kelly also believes Athletics Ireland could take their lead from some other sports: “If the GAA are allowed 30 players on the pitch, you could easily have a race on the road with 30 people, or if you took the top 20 men and women, based on times, have a cross country race.

“This is not about athletics versus GAA, or rugby, but the best athletes in my group are on that elite level, I would say better than any Gaelic player in Ireland. Just publish a roadmap, even if that has to be adjusted again. The sport is about competition, everything else comes after that.”