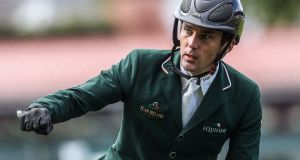 Ireland’s Conor Swail and Mark McAuley were among the biggest climbers in the top 100 of the Longines rankings of show jumpers published this week by the Fédération Équestre Internationale (FEI).

Co Down native Swail, who has amassed 1,893 points, moved up seven places from 45th to 38th while Co Louth native McAuley jumped right up from 70th to 56th (1,690). The highest-rated Irish rider remains Co Offaly’s Darragh Kenny, who moved up one place to 20th (2,210) while the rankings are still headed by Switzerland’s Steve Guerdat (3,050).

Swail is currently competing at the Winter Equestrian Festival at the Palm Beach International Equestrian Center in Wellington, Florida where, on Friday, he partnered Eadaoin Collins’s Koss Van Heiste into fifth place (59.72) in the five-star 1.45m speed class. Co Derry’s Daniel Coyle finished a place ahead with Ariel Grange’s Tienna (58.62) as the USA’s Kristen Vanderveen won in a time of 57.73 with Bull Run’s Faustino de Tili.

With Rose Hill Farm’s Rubens LS La Silla, Swail has been named on the squad for the first Longines FEI Nations’ Cup competition of the 2019 season which takes place at Deeridge Farm, which is also in Wellington, on Sunday, February 17th.

The riders, and horses, were named on Friday by Horse Sport Ireland’s show jumping development team manager Michael Blake who commented: “I think we have a very strong squad for this first Nations’ Cup of the season and I am confident we can do a good job. Cormac Hanley makes his first appearance on a senior Nations Cup squad after some very good recent performances and he adds a mix of youth to what is an experienced squad.

“There are some very strong teams in action, including the USA, who have included four of their World Equestrian Games team, and we are looking forward to what promises to be a great competition,” commented Blake. In addition to the home squad, Ireland will be facing teams representing Canada, Columbia, Israel and Mexico in the only qualifier to be held in the USA this year for the Longines FEI Jumping Nations’ Cup final in Barcelona next autumn.

Ireland, as a European nation, will not be eligible for league points in Wellington. Their first points-scoring outing under team manager Rodrigo Pessoa in Europe Division 1 will come at La Baule in France on May 19th.

In Europe on Friday, there was a win for Co Clare’s Eoin McMahon in the 1.50m jump-off class in Kronenberg in The Netherlands on Madeleine Winter-Schulze’s 13-year-old Chacco Blue gelding Chacon 2 while there were placings in Bordeaux for Bertram Allen and Denis Lynch and at Oliva in Spain for Niall Talbot.

Meanwhile, both HSI and the FEI have issued statements regarding the recent cases of equine influenza following confirmed outbreaks of the virus in Belgium, France, Germany, Great Britain, Ireland, Nigeria and the USA since the beginning of the year.

Dermot Forde, HSI’s national head veterinarian, advised that, “while equestrian events in Ireland are to continue as planned at the moment, HSI encourages all horse owners/breeders/livery and competition yards, to rigorously check the vaccination status of their horses and to closely monitor all horses in their care. Owners are advised to liaise closely with their veterinary surgeon for further advice and to allay any concerns they might have.”

Advice to minimise the risk of infection is published on HSI’s website.