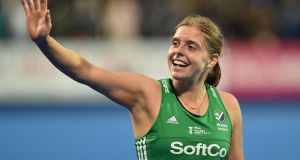 Katie Mullan scored an early goal for Ireland in their international against Spain in Granada. Photograph: Joe Toth/Inpho

Ireland suffered defeat to Spain in the first formal re-match of the World Cup semi-final in Granada as Katie Mullan’s early goal was overturned by the hosts.

Mullan struck 12 minutes in but Belen Iglesias tied things up in the second quarter before Carmen Cano got the winner with seven minutes to go.

Once again, coach Graham Shaw tinkered with his squad extensively. Mullan was one of just seven Irish players from the silver medal-winning side to line out, with Spain featuring 11 of the line-up that ultimately won bronze in London last summer.

The sides meet again on Wednesday morning before concluding this camp with a third meeting on Thursday.

While Shaw’s focus is wholly on working to develop and widen his panel, he will be hoping the side can muster at least one win. Since the World Cup, Ireland have just one win in capped matches in seven outings.

Elsewhere, the refixed Leinster Schoolgirls Senior Cup final between Wesley College and St Andrew’s has been set for Friday, February 8th at 2.15pm in Grange Road.