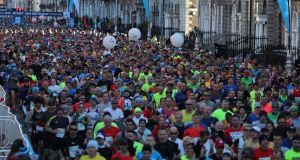 Race on, off or otherwise, the 2020 Dublin Marathon will this week be reviewing its starting orders. It may be time, race director Jim Aughney has admitted, to decide whether or not it can still take place as planned, with at least some major adjustments likely to be necessary in the face of Covid-19.

The 41st running of the event, set for Sunday October 25th, is a 25,000-entry sell-out, the organisers announcing that capacity back in January after introducing a new part-lottery entry system. Such is the ever pressing interest for race entries they received just over 35,000 applications in all.

“There is a board meeting, of the marathon organisers, on Thursday of this week,” Aughney told The Irish Times. “We will be considering all aspects of the matter, whether we feel it’s still safe to proceed, or whether we might defer that decision for another short while. But either way we will be making some statement on the matter by the end of next week.”

What is certain is the Dublin Marathon will not be proceeding as an “elite only” race: several big city marathons are still considering this option, the Tokyo Marathon taking place back in March with the elite field of around 300 runners, when Covid-19 was still in its early stages, with the London Marathon, postponed from last month to October 4th, not ruling out that possibility either.

The difference with marathons such as Tokyo and London, however, is that their elite fields can still attract a live TV audience, and thereby justify the enormous expense of closing off the roads along the 26.2-mile route. World record Eliud Kipchoge and Ethiopia’s Kenenisa Bekele are still signed up to run marathon, making it one of the biggest showdowns of recent years.

Other big city marathons have pulled the plug completely, including Berlin, which last year had 44,064 finishers and was originally set for September 27th, before organisers announced its complete cancellation on April 21st after the ordinance set in place by the German government prohibited all events with more than 5,000 people until October 24th.

Two of the major autumn marathons in Japan, in Yokohama and Fukuoka, were also cancelled outright last week, and while the organisers of the London Marathon are for now giving themselves until August before deciding whether or not to proceed as a mass-participation event - race organiser Hugh Brasher telling The Guardian last week that the “the flame is still burning” - Dublin will definitely not be waiting that long.

“Is there hope? Absolutely,” said Brasher. “But you have to do what’s right for society. You usually have 750,000 people out in central London watching 45,000 runners. Then there’s the medics, the 6,000 volunteers and the transport system. There’s masses to take into account when making any decision. We are trying to stay really agile and to keep scenario planning.”

Dublin’s concerns are not simply around social distancing guidelines, but also whether or not to proceed with a range of marathon-related contracts that including the manufacture of the finisher’s t-shirt and medals.

Dublin also doubles as the National marathon championship for men and women, and the option to proceed on that basis only may also be considered for this year. It’s almost certain that the overseas entry will have to be restricted in some way, with no vaccine in sight, and depending on Government guidelines which may also come into play.

For now the veto on large outdoor events is set to expire at the end of August, which has presented the Dublin organisers with another problem: two of the four countdown races, the Fingal four-mile and the South Dublin 10K, have been posted until October and November respectively; in both cases, it race entrants were unable to make the new date, the entry would be transferred to the 2021 running of the events.

Two other countdown races are now under fresh consideration: Frank Duffy 10-Mile and Dublin Half Marathon still scheduled for August 29th and September 19th. However that 10-Mile event, set for the Phoenix Park, is almost certain to be postponed, unless they limit the race entry and find an alternative venue.

2020 also marks the second year of race sponsor KBC Bank, and the event has enjoyed significant growth over the last decade, and come a long way from the 2,100 people that lined up at the start of the first Dublin Marathon in 1980. There has been a record number of participants every year since 2009, and Dublin is now the fourth largest marathon in Europe.

If the Government decides to extend that limit on mass gatherings beyond September 1st then the decision will take out of Dublin’s hands anyway, although again Aughney has indicated his organising team are unlikely to wait much longer before deciding what shape or form, if any, the 2020 event can take to ensure the safety and proper enjoyment for all the runners, spectators, volunteers, medics, and event sponsors.

Things are further implicated by the fact that under the new part-lottery entry system, there is an option that allows entrants to claim a refund in July (70 per cent of the entry fee will be returned); any unallocated entries (such as refunded numbers) will then be offered to any unsuccessful lottery applicants on August 1st, with offers needing to be redeemed by August 14th. Only by then the 2020 event may look like bean entirely different race, if indeed there is still one at all.