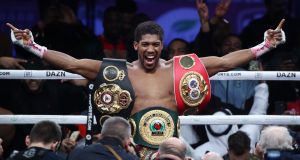 Anthony Joshua would consider fighting Tyson Fury for less money next year if it ensured an anticipated world heavyweight unification title bout between the two current champions could be held in Britain.

“Yeah, why not?” he said on Wednesday afternoon during a press conference to publicise his IBF, WBA and WBO world title defence against Kubrat Pulev in London a week on Saturday. “I’m now fighting Pulev for a massive pay cut. Matchroom [Joshua’s promoters] are taking pay cuts this year because we have to keep the sport alive.

“We are all doing our part at the minute so I wouldn’t mind doing it again. It’s not harming me, and it’s for a bigger cause as well. It’s a big fight, but the main objective is how do we get Fury in the ring?”

That last sentence was a typically canny caveat from Joshua which indicates that negotiations for the fight will be predictably complicated and protracted. While Joshua stressed that such significant contests should “always [BE]for the fans”, he also pointed out that economic realities will decide the location. “My management team are going to do what is financially viable and see what is going to get Fury to step in that ring. It’s a balance.”

The likelihood that the fight will be staged in the Middle East rather than Britain remains. Eddie Hearn, his promoter, made it clear he could not advise Joshua to fight in Britain if the money offered by a country such as Saudi Arabia is far more attractive. Joshua’s last fight, when he won a rematch against Andy Ruiz Jr a year ago this week, was held in Saudi Arabia.

“You’re damned if you do, damned if you don’t,” Joshua said over the choice of location. “The main objective is getting this fight done, but there is definitely the element that the fans are the most important and getting them together to watch a British classic. What finances can we gather to get Fury in the ring? It’s a tough one but I would definitely go for the fans this time around.”

Joshua looked back to his Saudi excursion last year. “It was a great success. For me, losing the belts [to Ruiz in New York in June 2019] and then winning them back was my success. I focused on the training camp and winning the fight. In terms of the event itself it showcased Saudi as a country that is hospitable to people from around the world. They can put on events, so they were really happy.”

Joshua and Hearn were criticised last year for failing to acknowledge Saudi’s dismal human rights record but, in readiness for Pulev, the 31-year-old from Watford said: “I’ve been away for two years but I’m back in the UK and I want to stay here as long as possible. I definitely want to go back to MSG [Madison Square Garden] to avenge that loss [against Ruiz]. Saudi, great hospitality, and feedback, is definitely an option. When I first turned professional I had offers from America, Germany, but I knew the UK was where I wanted to be. This is where my base is and this is always my priority.

“But fighters have to travel. Like Fury. He says: ‘I’ve fought in Germany [when Fury beat Wladmir Klitschko], I’ve beaten [Deontay] Wilder in America.’ There is a sense of a trail blazer, a road warrior, so I don’t mind getting on the road. I did it last year and I’ll do it again.”

It was announced on Wednesday that 1,000 fans will be allowed into the SSE Arena in Wembley to watch him fight Pulev, and Joshua said: “It’s going to be nice for people because when will there be another chance to witness a heavyweight championship fight when there are only 1,000 people in the room?

“It’s going to be intimate, it’s going to be closed circuit. You won’t have to worry about your missus having a pint of beer chucked on her head or 15 guys by the side of you getting into a fight.”

Joshua remembered the last time he fought in front of a small crowd. “It was Hungary [in February 2012]. It’s not bad. The pressure is off, you can get in your rhythm. And I think I need that sometimes. I am under a lot of pressure. I am physically good but mentally you have to stay strong. This year has been good to unload a lot of pressure and you have to take fighting in front of 1,000 fans as a positive. I am going to perform with no pressure and showcase the styles I have merged, which is sticking and moving and aggression and knockout power.”

Joshua has watched a lot of boxing in lockdown. “It just isn’t the same without seeing the fans’ reaction and the noise but, at the same time, I’ve enjoyed it. It’s been fun to sit back and watch it. We’re all in lockdown together so even watching the fighters go through it is different – but they’ve adapted well.”

He also said that lockdown has meant that “I’ve lived the life of an athlete for the first time. Since I turned pro we were straightaway selling out the O2, and with that there is pressure. Building the sport with my companies has meant putting myself forward. With [his various business ventures] shut down during the pandemic I have spent my time training. I have lived these nine months as an athlete and it has been a blessing. I have progressed a lot.”

Next year, on condition he beats Pulev, Joshua’s progression should face its most stringent test against Fury – most probably in the Middle East. – Guardian